We’re back. Man, oh, man, what an adventure! First and foremost, this trip was about seeing our daughter, son-in-law, and two grands, Sammy and Abby. When the family is at a military base half-way around the world for at least three years, it is so hard not to see them since the children grow and change so fast. Jim and I began hoarding air miles when we first learned of this planned duty station. Thanks to my Aunt Martha, who gave us some miles bumping us over what we needed, we were able to book well in advance.

Jim and I expected to be in Texas this month, but other family needs kept us in Tennessee a bit longer, so we had to fly from Nashville to Dallas to make our international flight, but that was fine. We left a day earlier and arrived in Okinawa, Japan, on the evening of the 17th. Jim and I stayed a night  in Tokyo and explored near our hotel during the morning before flying to Okinawa the next night. We got to enjoy our family until the morning of the 26th. The only real downside to the trip was that at some point we all got sick. Sammy was first, then Jim. Next was Abby, though we hoped it was only her 2-year-old molars, but nope, the crud. Then Amanda and Brett got to feeling yucky. I was the last one, but at least I made it back to Dallas before it got me.

Despite being sick with colds, we still had lots of good family-visit time and a few days when most of us felt well enough to do some of the touristy things that were second place to family time. First, Amanda had planned a birthday dinner for the three of us girls. Not only do all of our names start with A, we were all born in January. The guys kept the kids, so Amanda and I could have a mother/daughter birthday massage day. She and I independently got our hair done. Brett took Jim, Sammy, and me shopping at the local fresh fish market and farmers markets. We all went to this amazingly huge mall and the American Village to visit it. These outings were woven into the mundane (but ever so fun with family you’ve missed) daily events of cooking, cleaning, laundry, and Brett’s work. Brett did get leave for the last 5 days of our time there. Jim and I kicked Amanda and Brett out of the house twice, so we could have the kiddos to ourselves, so they had to find other things to do with their time. 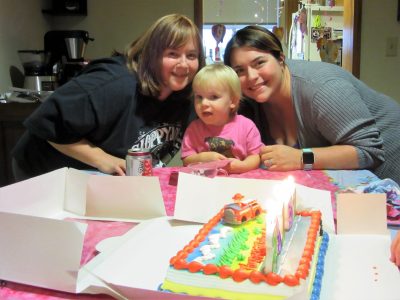 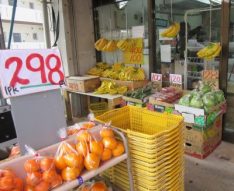 During our last three full days, Brett and Amanda gave us the tour of the island. One day, we visited the Pineapple Park followed by a visit to the American Village and dinner at Shabu Shabu. Amanda is allergic to pineapples, so the family had not been there yet. I felt guilty sampling all of the food and drink goodies when she couldn’t, but we had a good time. 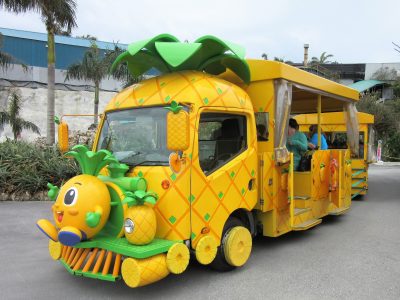 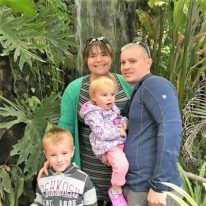 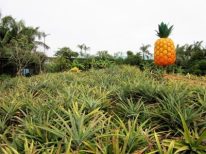 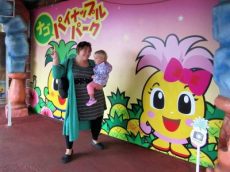 Amanda says, “Its a thing.” 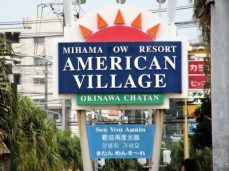 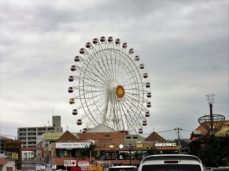 The next day we visited Shirijo Castle, a 14th century castle at Naha; it is a World Heritage Site. Amanda had gone a few times, so she stayed home with Abby; Brett and Sammy were our tour guides. The castle and grounds were beautiful, and for us history buffs, intriguing. I only wish there had been a headset that would give us all of the history in English as we toured the castle, but then again, Brett and Sammy would have gotten bored waiting on us. We wrapped up our trip with lunch in the cafe on the grounds. That night, Brett cooked the fish bought the day before (both he and Amanda are exceptional cooks) while Amanda and I took Sammy to his T-ball game. Sammy started on the pitcher’s mound (it’s his first year to play; it was only his 2nd game, and he is the youngest in the league). When he stopped the second ball that was hit, I got so excited that I spilt what was left of my hot chocolate all over myself trying to clap and yell for him.  Silly Grandma. 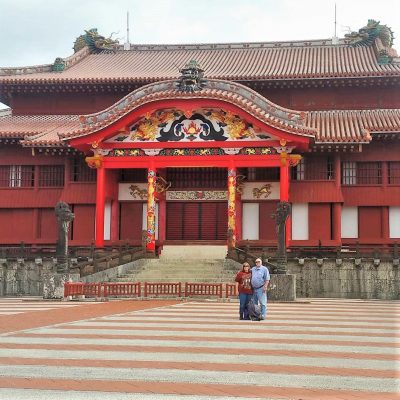 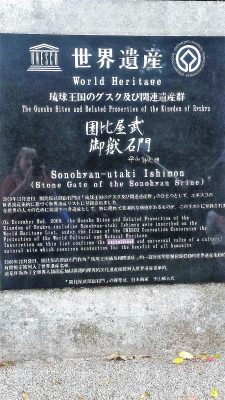 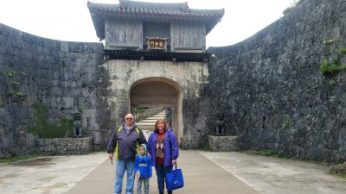 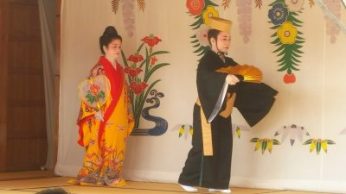 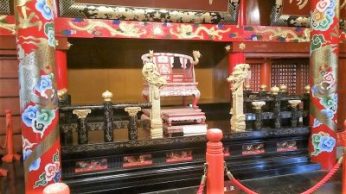 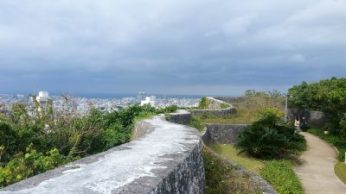 Our last full day was a morning of firsts for all of us. We drove north to Nago to visit Nago Castle Park where we enjoyed breathtaking views and truly spectacular cherry blossoms. Next, we went to Nakijin Castle, a National Park and UNESCO World Heritage Site, and walked through the castle ruins while also enjoying the views and a few more cherry trees in bloom. Finally, we attempted a stop at Dino Park, but tour groups had booked the restaurant and the park for a private party, so McDonald’s was our lunch stop before coming back to the base. Brett made a scrumptious supper of mouth-watering ribs, grilled corn on the cob, and garlic potatoes; he could be a chef! 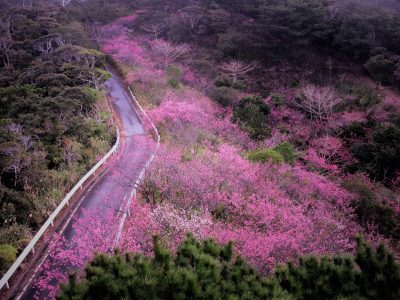 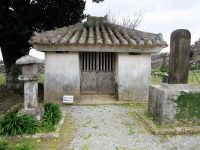 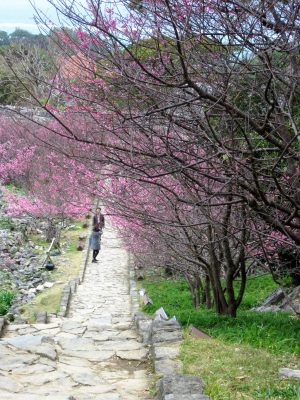 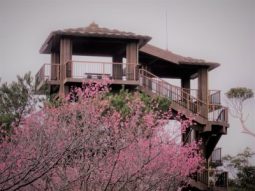 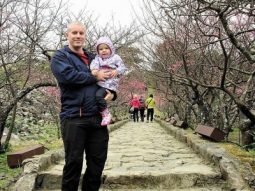 Brett and Abby at steps to Nakijin Castle 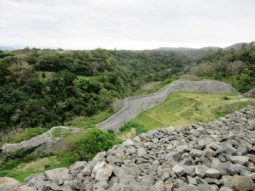 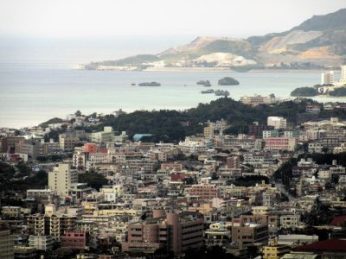 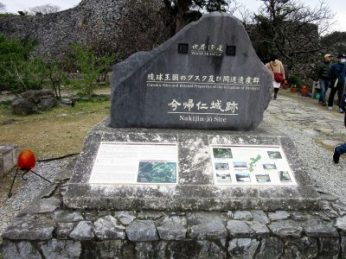 The morning of the 26th, it was time to head home. Sammy suggested we make a family picture, including Chloe the dog, before we left. The kid is a genius at 5. Why didn’t any of us think of that? Despite the fact that half of us were still in PJs and none of us had been up too long, we got out the camera. Amanda set the timer, and we quickly jumped into position. What a wonderful keepsake! 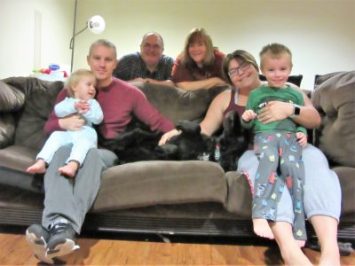 Our travel was affordable and not too hard on us despite the hours in the planes and airports. Even with all of us being sick at some point, I’d do it again in a heart beat. Most of all, I loved seeing and being with them. Experiencing some of the beauty, culture, and history of Japan, and Okinawa in particular, was the bonus.

2 thoughts on “Visiting Family in Japan was Awesome!”