Lusk, Wyoming was chosen as a location for a week’s stop after leaving Western Nebraska and before going to the Black Hills of South Dakota. We had no clue it would be such a neat little town and a fun adventure. We camped at BJ’s Campground, and Jim writes about the campground, while also giving a little bit of information on the town; you can follow the link above.

Lusk is located on what was the Cheyenne – Deadwood Stagecoach trail. As a result, there is an interesting museum in Lusk known as the Stagecoach Museum.. The adult entrance fee is $2. I didn’t see a fee for children, so you may want to check on that if you go. The place is much bigger than it appears, and in addition to Stagecoach history, it covers quite a bit of Lusk history and many random but interesting things. Your fee gets you into most of the downstairs area, the upstairs area, the large back “garage” type area, and out into the back yard. All areas are filled with history, interesting displays, and a bunch of fun facts – well worth every penny of your entrance fee. (Click on photos for captions or hover cursor over the photo.) 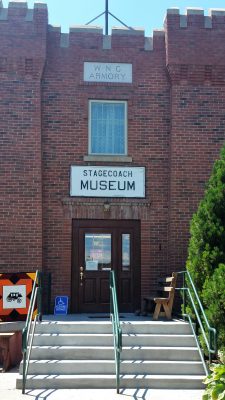 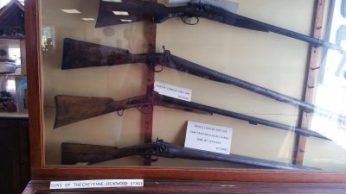 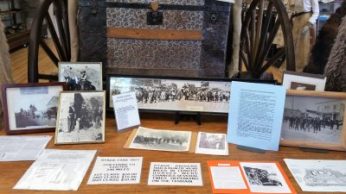 An old trunk and memorabilia 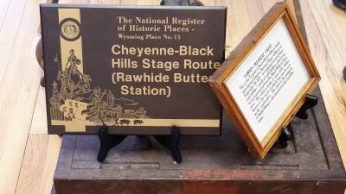 A display of period life

Stagecoach on 2nd floor of bldg (how?)

Jim and I have already shared about the extremely nice fireworks display the town put on the night of the 4th of July here, but we didn’t attempt pictures as our cheap digital does not do well at night. Plus, we wanted to enjoy every moment of the fireworks show.

The most outstanding thing Jim and I did during our stay in Lusk was serendipitous. He and I just happened to be in town for the one weekend each year that the town and surrounding community comes together to enact the Legend of Rawhide. We had seen the references to the legend all week; we knew the buttes in the distance are known as Rawhide Buttes, and many things in the town are named Rawhide this and that, but he and I were clueless.  The Friday morning before we were to leave the next day, I made a run to mail some postcards and happened to notice a flashing sign announcing tickets were available for performances at the fairground that night and the next. I wanted to know about the legend, so I told Jim about it upon my return. We began trying to figure out how to get tickets. Then, as if my desire for tickets had set some unseen events into motion, there was a knock at the camper door. It was the owner. She came to our site to see if we wanted tickets to see the performance, and she even had the “performance only” tickets we wanted (extra $5 to stay after for a dance). Heck, yeah! I whipped out $30 for our two tickets, and we were set. I have NO regrets. It was worth every single penny, and all of the money goes to scholarships for local kids.

I don’t want to spoil the story should anyone who reads this ever find themselves in the area the second weekend of July, but here is the gist of the story line. The Lakota Sioux in the area pretty much ignored the settlers crossing their land, but one day a wagon train came through and camped at the foot of the dark buttes. In the group was a young man who was sweet on a young lady in the group. Unfortunately, he had developed a hatred for Indians based on things he’d heard or read, and he wanted to kill one. Well, you guessed it. One night he did just that in secret, and his actions led to a series of events from which the word “rawhide” became attached to the buttes, giving them their name.

It was a fantastic, pretty realistic portrayal of the events as told in the legend. It has been performed for 70+ plus years. There was a pause during a time when there weren’t enough horses available in the area to be used and during a lull in interest to be involved. (It takes dozens and dozens of horses and many people of all ages.) I’m so glad it was reinstated and continues today. The only sad thing was that one of the “braves” was injured during the performance, and it happened right in front of us. After he was seen to and taken to the hospital, the show went on. An announcement was made at the end of the performance that the young man would be okay, though he did have 2 broken ribs and a cut on his eye. I think I was more worried about him than these tough cowboys, ranchers, and Wyomingites. I’m sure they’ve seen much worse.

Here are a few photos Jim made before and during the show. In the photo of the attack, there is a blur bottom left center. That is the young man falling off of his horse, but the other horse and rider, which fell on him, are not in the screen just yet. It was a split second later. 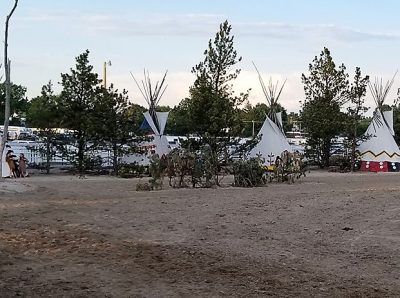 Lit at the end of performance 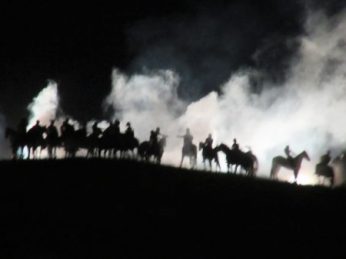 Indian braves on hill before attack 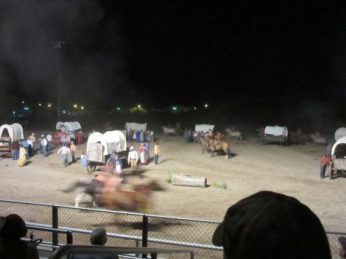 Jim and I highly recommend attending this if you are in the area. In fact, we simply recommend visiting Lusk, or some other town in the same general area, to enjoy what this part of Wyoming has to offer. The folks in Lusk make a full weekend of it for the Legend of Rawhide; many other events are scheduled in addition to the performances, but we couldn’t stay for all. That said, we loved our week in Lusk and the surrounding towns.