We’ve had so much fun the last week and a half that I’ve been too tired to blog about it. 🙂 Today may be a stay home in the RV day – at least for the morning, so I’m playing catch up. Jim is working when we’re not out and about, so he’ll post something when he can.

As disappointing as North Platte and it’s surrounding area was, Lusk and the surrounding area was a beautiful surprise. As a result, I’m dividing the blog posts for our week there into three parts, and today I’ll tell you about the fun we had in the Casper area, which is about an hour and a half from where we camped.

There were two fun-seeking highlights for us in Casper and two wins on foodie places. The big thing that Jim and I wanted to see in Casper was the National Historic Trails Interpretive Center, and it is highly recommended, especially if you are a history buff or have kids. We fall into the category of history buffs, but several times while exploring the center, we mentioned to each other that this would be a great place to bring grands. The Interpretive Center is very appealing visually, encourages hands-on learning, and is extremely informative and educational regarding the largest voluntary migration in human history, which utilized trails like the Oregon Trail, Mormon Trail, etc. It also addresses the brief time of the Pony Express that followed many of the same trails. Even Jim and I sat in a covered wagon set up to give the feel of what it was like to cross a river in one of the wagons. The price is budget friendly because it is FREE. (Reminder: Click on, or hover cursor over, photos to see captions.)

One of several displays 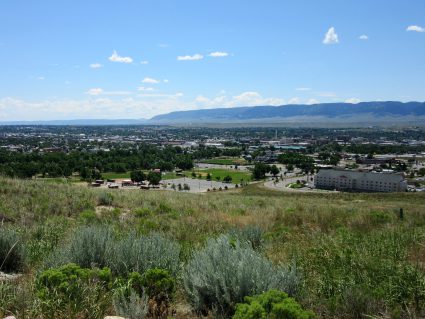 View from NHTIC looking over Casper 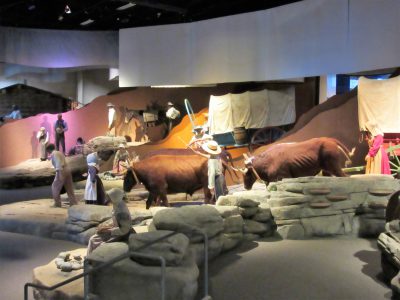 Some of the informative displays

Jim says he could get a good trade on our RV. 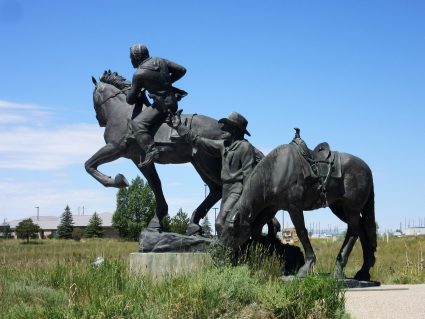 The other experience that Jim and I really enjoyed was also FREE, except for gas; we drove up into the upper Laramie Mountain Range, which includes Casper Mountain. While the roads were rough (we were wishing we were in an off-road vehicle), the views were spectacular. If you follow the link above, you can find out about year-round activities available at Casper Mountain. 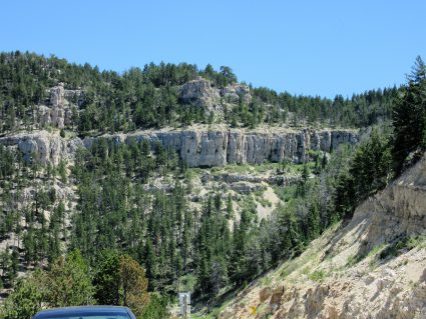 On our way up Casper Mtn 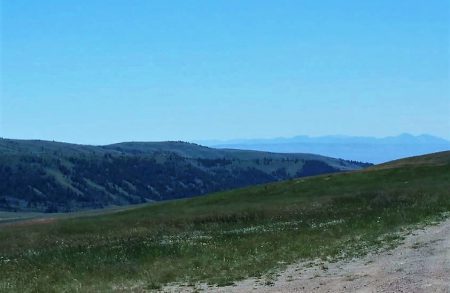 He and I found two really good local places to eat in Casper. HQ Southern BBQ is just off the I-25, and the food is yummy with large servings. You may want to consider splitting an entre. What made this stop extra special for us is that we got a taste of home (TN) with sweet tea (hard to find north and west) and sweet cornbread in addition to the southern style BBQ. Evidently, the owner is from Tennessee, too.

The other food spot we enjoyed is Johnny J’s Diner. If you want the feel of diners of the past and some good food, try this place. We ate lunch, but the breakfast menu looked amazing. There is a child’s menu, and 55+ get discounts on the breakfast menu. It’s worth getting off the Interstate to find this eating joint. 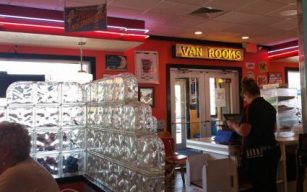 One more thing I want to mention is that between Lusk and Casper, just off the Interstate, is a town named Douglas. There is a Railroad Interpretive Center there that both adults and kids can enjoy. It is FREE, also, and the stop makes a nice leg-stretcher stop.  I’d advise going in the morning, if during hot weather. We explored a variety of old train cars.  Helga (the center manager) was glad to show us the 60+ year old electric train, set-up at the center for your enjoyment. we also received tourist information, and had a chance to get some cold water and take a potty break. 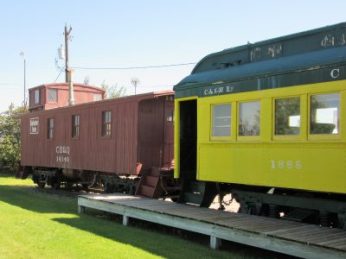 Outside of some of the cars

Jim trying out the dining car

All of this was FREE except for gas and the food we chose to purchase.  We had a wonderful time exploring Casper, Wyoming and learning more of the history of all the migrants who passed through there.