I love to go to places that show the culture and heritage of the places we are visiting. If you have read many of our blog posts you will know that I am a big history buff. If it wasn’t for people and the situations that drove them to do the things they did, then there would be no history. So studying the people is very important to me and my goodness did we ever find a gem in Henderson, Kansas. 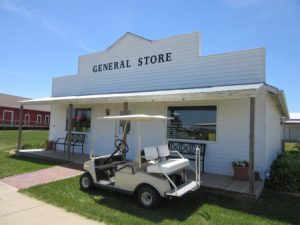 The Heritage Park is a collection of historical buildings (some authentic, some replicas) filled with historical artifacts. When you pull into the parking lot you go to the General Store (and gift shop). Inside you will find souvenirs, some artifacts, and a document of the religious progress of the Mennonite people. At the general store, we also met two wonderful people. Norm Yoder and Suzanne Ratzlaff both of whom were well versed in getting me to understand the Mennonite culture. We asked to take the tour ($5.00 per person) and Ms. Suzanne was our tour guide. It was a hot day and the golf cart brought around for us to ride in was very welcome.

Our first stop was the Immigrant House. When the Mennonites first arrived in Nebraska they needed a place to stay through the winter. A building was erected to house the 35 families that came until they could build their houses in the spring. About 200 people lived in this one building. I can only compare it to having about 20 people living in the RV for the winter. Let’s just say they definitely got to know each other that year.

200 people lived in this one room for a whole winter

The next stop was the Depot. This building was a replica of the train depot that welcomed people to town. The interesting story here centered around the man that worked at the depot. He was drafted into the Russian Army. If you know about the Mennonite faith they are pacifists and do not fight in wars. So, the man escaped from Russia and sailed to America. Fearing the Russians, he moved on to Pennsylvania, then to Minnesota (where he had family) then on to Nebraska. When they opened the museum, they had a display that discussed the man and his exploits but some of his family came down from Minnesota to see the opening and told them to take it down. It seems that his family still fears the Russians.

Next, we went to the church. The church was rather small and looked almost like a big house instead of a church. It had no steeple and it was explained that this was the way Mennonite churches were built in Germany and Russia, so when they moved to America they saw no reason to change. The pulpit in the church was original (even the green paint). 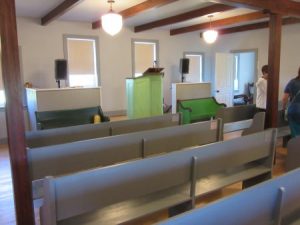 We then visited the house of the Freezen (I think that’s right) family. In the late 1800’s school had let out and some of the children were going to visit another house a couple of miles away. Soon after they left a huge blizzard started and soon you couldn’t see. The father feared the safety of his children so he felt his way along the fence to the edge of his property and started yelling. Finally, he heard a reply and all the children made it safely home. Ms. Suzanne (our tour guide) was a teacher and had a student whose ancestor was one of the children. The student was very happy that her grandpa went out in the blizzard that day. 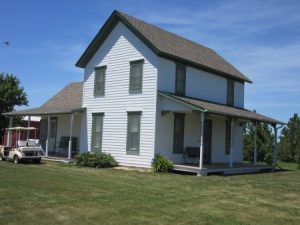 Next, we went to the barn. The horse stalls in this barn were built so the lady of the house could feed the horses without having to actually go into the stall (she was afraid of the horses). The upstairs of the barn was huge. It could have been used for community gatherings.

In the barn horsed fed over the wall

We then went to a building that housed a display that discussed how to drill a well. It was hot in the building though so we left for the school house. All school houses are interesting because Angela just fits well in them. 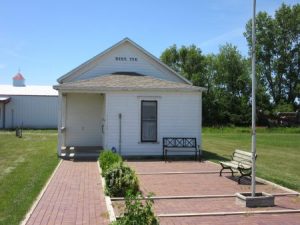 The new school marm, ringing the bell to start school

Finally, we went back to the General Store and had a treat. I don’t remember the name of it but it was like an apple turnover that looked kind of like a little hat. While we were enjoying our treat, Ms. Suzanne discussed famous Mennonites. Hershey’s Chocolate, and Smucker’s Jelly were started by Mennonites. Musical Acts John Denver and the lead singer of Paul Revere and the Raiders were Mennonites. She had pictures and it was fun to guess who the celebrity was.

It was a great visit. This is one of those special gems where you know it’s a small museum so you don’t expect much. Then when you get there you learn so much. Thanks to Suzanne and Norm for the great time. If you are ever in the Henderson, Nebraska area do visit the Mennonite Heritage Park it was a wonderful treat.

One thought on “Henderson Nebraska Mennonites”