Yesterday was our anniversary. Where did we spend our day? In the town known by many names, including Buffalo City and Queen of Cowtowns: Dodge City, Kansas.

It was as long of a day trip from our campground as we’d care to make, but not knowing when we might be near again, Jim and I decided to make the trip there. So as not to worry about being gone from Chewie for too long or not being able to do what we’d like to do because he was with us, we arranged doggy daycare with a Rover.com caregiver. Chewie had a fun time with Lauren, Mark and their two dogs, and we had a great Dodge City anniversary date.

First on the agenda was lunch, and evidently we chose well. Jim and I enjoyed the atmosphere, food, and service at Casey’s Cowtown Steakhouse and Club. Since it was lunch and we’d be out and about in the heat, both of us opted for charbroiled burgers (yummy ones) instead of steaks that we might have gotten had it been dinner.

Next, we drove to Boot Hill. Yeah, it’s a cheesy tourist trap, but it is also filled with lots of interesting information about the land from the time when Native Americans and millions of buffalo (American bison) roamed freely up through present day. Of course, one enters and exits through the gift shop. Lucky for us, we are no longer tempted to buy much since we live in an RV, and we send the grands postcards now and then rather than buying junk they don’t need. After getting our tickets, we watched an introductory video before heading toward the museum, passing by the jail. Of course, I had to put the hubby behind bars for the heck of it.

Hubby is grimacing about being in jail.

In the People of the Plains Museum, we saw displays pertinent to the tribes of the plains, buffalo, cowboys, etc. The final two exhibits addressed the last Marshall of Dodge City,  a man named House, and the impact of the history of the West on early TV shows. In fact, the last exhibit had a 50s/60s living area with black and white TV playing the show “Gunsmoke.”

People of the Plains Museum 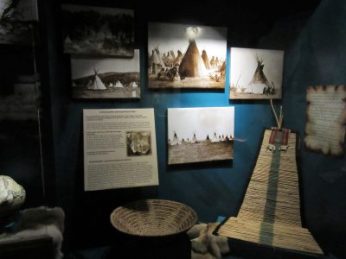 One of the several Native American displays

I learned in the museum something upsetting that I was never taught in history class. This thing was so wrong on multiple levels and made me want to cry. Since getting back home, I’ve done some research. The information is out there, so there is no doubt that the United States government ordered (and made lucrative) the extermination of the American bison (buffalo) in an attempt to starve the native peoples, so they would leave the Great Plains! (One place to read about it here) This was so WRONG! The museum states that the population of bison went from around 60 million to about a thousand in just a few short years, and the plan did wreak havoc on the native people. My research indicates that the figure of 60 million is a bit high, but it could have been 50 million. Still, the numbers are staggering, and the cost and harm to people, animals, and environment alike was just not right. My research indicates that about half a million bison live in the United States today. Dodge City was the hub city for the killing of the buffalo and selling of hides, hence, one of it’s names: Buffalo City

Jim went up to the cemetery, which is above the People of the Plains Museum. If I understood correctly, the cemetery used to be much larger than it is today, but he found a few interesting markers. Here’s one.

One of the signs in the Boot Hill Cemetery

After that, he and I went down to “Front Street” to explore what was inside the replica of the original street from Old Dodge City, built using photos made back during its infamous days.

I was tempted by, but passed on, a set of measuring spoons in the General Store. Jim enjoyed a sarsaparilla in the Long Branch Saloon while I listened to the piano player. We found original signatures of people like Wyatt Earp and Bat Masterson, enjoyed learning of the early settlers in Dodge City, viewed collections of fire arms, read stories of everyone from outlaws to doctors as we learned of life in the town. When towns like Wichita quarantined Texas longhorn cattle, and towns like Abilene got tired of the rowdy cowboys and related problems by turning the cattle and cowboys away, Dodge City became one of the hubs in the waning years of the long cattle drives, hence, its name as Queen of the Cowtowns. (You can read about cowtowns here,) 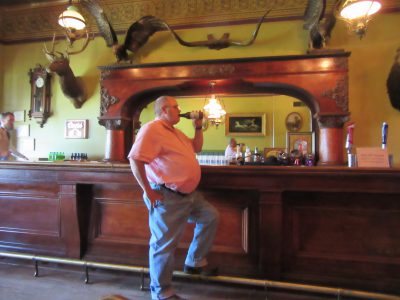 Jim having a drink in the Long Branch Saloon

A few of the signatures of early Dodge City residents

Some of the gun displays

One thing that Jim and I realized during our perusal of the exhibits inside the on Front Street buildings is that Wyatt Earp was never a marshal or a sheriff. Despite how he is portrayed as lawman by Hollywood, Earp only served as assistant marshal twice and as a deputy sheriff once. Though we checked out a few other buildings at Boot Hill after a stop in the restaurant, the sweet ending was really our ice cream treats in the on-site eatery. 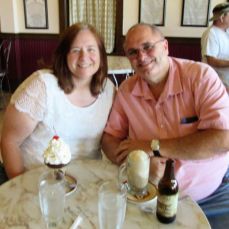 Leaving Boot Hill, we drove past the cattle yards and out to Fort Dodge. Boy, was that a surprise! We both expected the remnants of a fort we could tour like at Fort Scott. I think I would have been less surprised to find that it was a fully operational military base than what we saw. It was not bad. In some ways it was cool, but it was so unexpected, and we didn’t really discover a way to find out why.  The “fort” was made up of a building designated as a home for veterans (based on the people we saw, maybe a retirement home). There was a VA facility (health?), several streets of residential homes (military housing?), a post office, and a store/cafe/visitor’s center that is only open a few hours a day. This left us with quite a few questions about what Fort Dodge was and why it is what it is today. 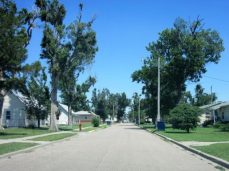 Some of the homes at Fort Dodge

In our last drive around Dodge City, as we made our way back to where Chewie was staying, Jim and I stumbled upon the Boot Hill Casino. Jim asked, “Do you want to check it out?” I replied, “Yeah.” Jim whipped in to the parking lot, and in a few minutes we were inside. We learned that if we each obtained a player’s card as first-time visitors, we would receive either $30 in free play or $30 of free food each. Of course, we chose free play. When our free play money was used, Jim cashed out $20 (subtract the $1 required to start play), and I cashed out 28.50 (less the $1 to start play). In other words, the casino gave us $46.50 to play for 45 or so minutes there; we walked away with that money in our pockets. Free money is always cool. 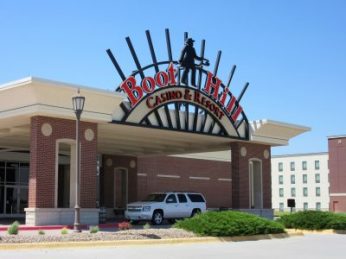 Once Chewie was picked up, the three of us headed back to the camper. Jim and I had discussed at length all of the wind turbines along each side of the road for several miles just before reaching Dodge City. As I drove in silence (Jim and Chewie were sleeping) this section of road again, it was as if I were moving between the ranks of giant soldiers dressed in white uniforms, twirling their blades daring anyone to enter their domain. Okay, that was a little off the wall, but it is what I thought. Actually, I love the fact that the wheat farms along this stretch of highway are also energy farms.

Rows and miles of turbines

It was a very good day.

One thought on “Buffalo City and Queen of Cowtowns”