Me at the Ike Statue, written in the concrete is “Champion of Peace”

I like Ike. I always have, and this impressive Presidential tour in no way will diminish my appreciation of the man. Eisenhower was raised in the small Kansas town of Abilene, about an hour from where we are camping. This is the first Presidential Library that Angela or I have been to, and we did not know what to expect. There are five buildings on the property. The first is the Visitors Center and Gift Shop where they play a 23-minute video on the life of the President. Here you buy your tickets for the tour, $12 for adults ($2 off for AAA membership). They also have many collectibles, T-shirts, I like Ike buttons, etc. 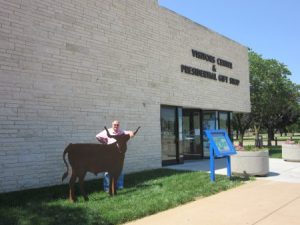 The next building is the boyhood home of the President. We learned that he had five brothers (another brother died young) and lived on the wrong side of the tracks. Whoever said, “Nothing good will ever come from that neighborhood” didn’t know the Eisenhower family. He and all his siblings turned out to excel in their fields. One was a pharmacist at age 20; one was a vice president of a bank; one was a lawyer; one was an electrical engineer and owned two radio stations; one was the president of Kansas State College, and – oh yeah – one became President of the United States. His boyhood home was not moved to the Library property; they built the Library around his boyhood home. Much of the property that the Library sits on is family property that his dad bought in 1898, when Dwight was 8. He lived in the house until he left for West Point in 1911.

Angela outside the Presidents Boyhood Home

Inside the home, the radio in the corner was given to his mother in 1940 and she was able to hear her son talk during the war.

We encountered one interesting person on our tour of the home. The tour guide that discussed the house and the family had a very distinguished accent. She said we could ask any question at any time so I said, “You have to tell me, the accent. Where are you from?” We all got a laugh when she said “Kansas,” but she then said she was from Germany. How cool. 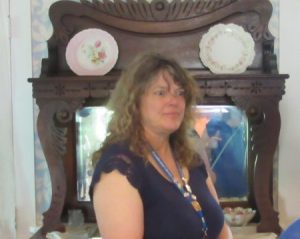 Our next stop was the Chapel. This is where the President, First Lady (Mamie), and their first child Doud, who died of scarlet fever at the age of 3, are laid to rest.

Family Grave Site inside the Chapel

The next stop was the Library itself. Here is where we found the mistake we had made. You see the day we visited was Sunday. The Library is a research library,and no one is doing any research on Sunday. We asked where the books were since this is identified as a library. We were told that the books part is only open during the week, and one must have a reservation to do research to see the books. Bummer, but note to self, next time you visit a Presidential Library do so on a weekday and plan “research”.

The last stop was the best part. The Museum. Oh my, this place was huge. It started by talking about how Abilene became a town, long horn cattle, cattle drives, Wild Bill Hickok (Marshall of Abilene for a time). That was three rooms to give you an idea of the rugged area in which the President was raised. You then got to meet the young man that went to West Point, him meeting Mamie, the people he worked for and the folks he worked with that became big names, Patton was a dear friend. There were displays about the war and especially D-Day. There was more information from after the war, his election, and his presidency. Eisenhower began the interstate roadway system and was the first President to use television. It went on and on. As a history buff, I was in heaven. I could have spent a week in the place. As it was, I think Angela dragged me out after 3-4 hours.

Murals of Ike and Mamie

The table on which the D-Day plans were drawn

It continues on and on 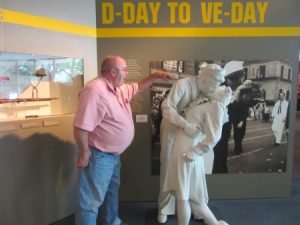 What I got out of this experience is this. Dwight D. Eisenhower was an exceptional General and President. He was hard working and a man of character. He never worked for himself but always had the American citizenry in mind. In short, I like Ike.