Well, I get to do another post; it must be another National Park. Yep, but this one is a National Battlefield. When I heard that, I just knew I was going to get to walk on a bunch of trails. WRONG! When we got there, it started sprinkling, and Mom wanted to keep me clean for the trip to Tennessee the next day. So, I viewed things to write this one mainly from the car.

Me at the Visitors Center

The battle was interesting. In Kansas, they hadn’t yet determined if they would be a free state or a slave state. Some folks said slave states should be south of a certain line, and others said it should be left up to the states to decide. Well, eventually these folks were going to fight. They did on August 10, 1861. It was not raining.

Wilson’s Creek ran through the Battlefield

This was the second battle west of the Mississippi River and the first battle in the Civil War where a General was killed. The General’s name was Nathaniel Lyon (Union General). The South won this battle but lost more people. There was a battle up on Oak Hill, and after the fight, the hill became known as Bloody Hill. 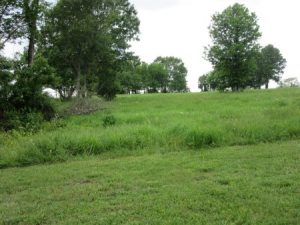 Dad wanted to go see where the General was killed, and I thought that would be a good hike, but mom wouldn’t let me because it was sprinkling. What happened? The sun came out while he was hiking. Oh, well! I smelled good for Tennessee; way to go mom.

This is where General Lyons was killed – notice no rain

This was a very nice place to see and walk around. The battle could have gone either way and the history was interesting. The trails (that I didn’t get to walk) were 1-2 miles long and not difficult. This is a place that would be great to put on your dog’s calendar (just go when it’s not raining). 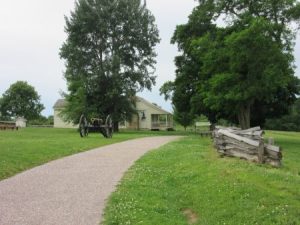 Me and a cannon – aimed at mom

Where one of the Southern Generals made his headquarters.

Hey, Dad, the battle is over there. Let’s go