Oh, we forgot to share this maintenance issue. Back after moving to Northgate RV Travel Park, Athens, Alabama, and after Jim had gone to Pennsylvania for his first week on the job site, I discovered wet carpet under my chair and next to the wall between the water inlet and the big slide. One storm after the other, as many as three a day, had been rolling through. I didn’t know if it was storm related (blown in some way down/under the slide) or if it was related to the newly replaced water inlet. Since I didn’t make the discovery until Thursday morning, I was very thankful I’d turned the water off while I’d been away each day Monday through Wednesday; it could have been worse.

Wet area extended where my chair normally is.

When Jim got home, I told him about the situation. Friday, I called our RV service guys and discussed it. The answer was that it could be either of the things I had thought about. When Jim was able to take a break from work, we went out together. He took the water outlet out, and sure enough, this was our problem. There was a steady drip. Either the connections were not tightened well enough upon installation (we knew they were training a new guy, so we figure it was a new guy mistake – our assumption) and/or it bumped loose on the move from Savannah to Athens. It didn’t matter because it had to be repaired.

Just pulled out – see the drips?

Jim got his roll of plumbers tape and put some on to give an extra secure connection. He then put everything back in place and re-caulked around the inlet. The putty tape was new, and we didn’t have any. Jim made sure it was back in place and completely surrounding the edge before putting it back and caulking around the outside edges. (Note to self: get some putty tape to have on hand.) 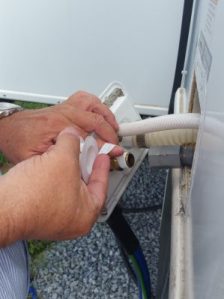 With all of the rain and humidity, it took four or five days before I could say with absolute certainty that all of the carpet was dry. When I could, I was happy to tell Jim. He did an awesome job fixing (as we say in the South) the problem.

That was on my mind today as I spent my day Spring Cleaning the camper. After days of heavy wind followed by a full day of rain yesterday, I was pretty happy to finally have a sunny, comfortable day without wind. Curtains pulled aside, shades up, and windows opened, I spent the entire day cleaning away the dust, sand, and whatever else from the winter on the road.

Sheets stripped from the bed, I headed to the laundry room first. Sheets were the only laundry I’d not already done this week. Sheets on the line drying, I tackled the bedroom first. It was the easiest room to do. The bathroom was next, and then I moved to rest of the RV – a combination of kitchen/dining room/sitting area/entertainment area/office. It is not 100% free of dust and dog hair even now; I’ve accepted that it is an effort in futility to expect that. I’d say it is 95% free of those things for the moment. Dog hair shows up in the most unexpected places. Anyway, that percentage will change all too quickly. We love the dog and the lifestyle, so it is just part of it. At least I know everything was dusted, swept, mopped, vacuumed, etc. today, 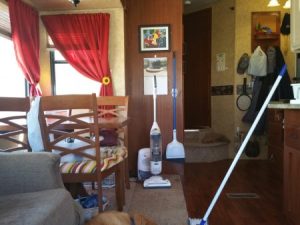 I even went above and beyond in my estimation. The campground we’re in now doesn’t have sewer hook-ups, so we’re having the tanks emptied tomorrow late afternoon by the pump-out service. That will save Jim time Friday morning as we get ready to head out for our longest move in several weeks. (He won’t have to drive to the dump station, get hoses out, empty, rinse, put hoses away.) Since these things are true and since the plastic container holding the sewer hoses smelled (and not in a good way), I pulled the container out and addressed the situation today,also. Filling the plastic container with water, I poured about a cup of bleach into it, put the lid on, and let it sit for three or so hours. Then, I emptied the water and spread out the pieces to dry. Finally, I replaced everything in the bin and stowed it away in our bay area underneath. Guess what? It doesn’t stink now, and it won’t for a couple of days.

Yep, Jim was a great repairman that day, and the other stuff are just a few of the things that I do to keep myself busy and productive. While Jim works, I do, too. I don’t earn money, but I get the satisfaction of a job done well.