Jim arrived home from Pennsylvania Thursday night, and as soon as he could get his “paper work” done Friday morning, we moved north to Elizabethtown, Kentucky. You can see the view from our campground site here. After a full day Saturday of yucky business-type things, like doing our taxes, the three of us needed to get outside in the sunshine and fresh air. Jim found a hiking trail not too far from us, so into the car we went. We parked in a business’ lot, but it was where the GPS took us. After a little bit of searching, we located an entrance to Buffalo Lake Trail.

Entrance to the trail we found

Entering the wooded area, our pack leader (Chewie) led the way in search of Buffalo Lake. The lake itself was not quickly apparent, but it wasn’t long before we found ourselves walking alongside a stream of decent size. I think that this may have been Buffalo Creek, hence the name of the lake, which is actually classified as a reservoir. The water upstream of the lake is pretty clear, so it makes me wonder if it is spring fed. Chewie made all of the correct twist and turns and led us to the lake, though we were probably a 1/3 into the hike before we could see it.

Our pack leader demonstrated for us how to ease around puddles still on the trail. In fact, had we come a day earlier, it may have been too muddy for us to walk up and down hills and along narrow paths on the edge of the creek gully. It would have been too slippery for us old folks. (Click on photo, or hold cursor over it, to see caption.)

Pack leader out front on trail 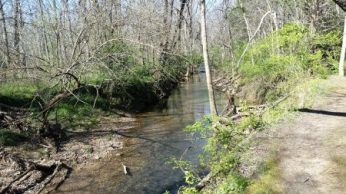 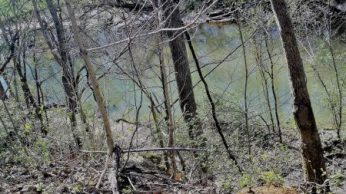 Climbing up and down hills now

The lake has been found! 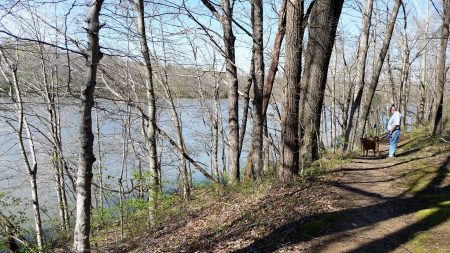 There are multiple bridges throughout this 2-mile hiking trail, which actually has many side trails for further exploration. The path crosses the stream and down-hill, run-off areas frequently. According to posted signs, some (if not all) of the bridges were built by boy scouts.  While we did not see much in terms of wildlife, we did encounter several people, individually and in family groups, enjoying the area. Some were fishing and others were biking or hiking as we were (much of trail is far from level or smooth).

Another bridge – over down hill run-off area 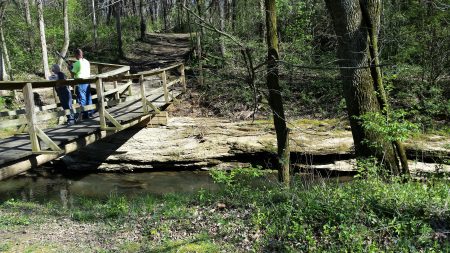 Crossing stream – no lake yet

A bit of time in sunshine and fresh air with enough of an exerting hike to make us sweat was just what Jim and I needed to de-stress after a day of frustration and irritation in trying to get his onboading packet finished for work and our taxes ready. For Chewie, it was just a walk in the park, or in this case, the wildlife preserve.

While I have a list of things to accomplish this week, I don’t expect to be anywhere near as busy as I have been the last three weeks, so Chewie and I might get to explore Kentucky a bit more before our mega two-day move this coming weekend.

One thought on “In Search of Buffalo Lake”