If you have followed our blog over the years, you know that we enjoy spending New Year’s Eve watching a drop.  Before we were full time in the RV, I saw the Conch Shell Drop in Key West, FL, and Angela and I saw the Pelican Drop in Pensacola, FL.  Since we have been in the RV we have attended the Moon Pie Drop in Mobile, AL and the Crab Pot Drop in Hampton, VA,.  This year we decided to see the Olive Drop in Bartlesville, OK.  Being in Arkansas, Bartlesville is about a six-hour drive; however, since New Year’s Eve was Saturday night this year, we planned to drive there Friday, stay Saturday, and come home Sunday.

The drive to Oklahoma was very nice.  I’m always amazed to see the hills of the lower Ozarks of Arkansas open to the flat plains of Oklahoma.  We stopped at a rest area called the Hoppy Lockhart Welcome Center.  I thought this place was really cool because Hoppy Lockhart was a laborer for the Department of Transportation.  He worked for them for 40 years, and they name a welcome center after him.  It just made me feel good to see someone who was good at his job being recognized. 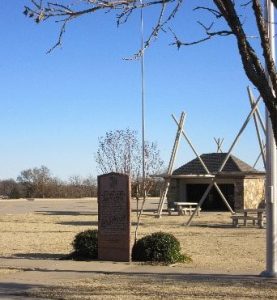 We stopped in Tulsa on the way to let Chewie walk and to stretch our legs.  While there I looked for a restaurant and found a place called Charleston a few miles away.  We had a very nice supper at this classy place.

After supper it was about an hour to the hotel.  We got settled and had a nice night’s sleep.  Saturday morning we got up and decided to take a look around town.  Bartlesville is very nice little town.  It is the hometown of Frank Phillips the namesake of The Phillips Petroleum Corporation.  Bartlesville was also the first town in Oklahoma to strike oil in 1897.  Frank Phillips had Frank Lloyd Wright design a building, which is now known as the Price Tower.  The Price Tower is where the olive is dropped on New Year’s Eve. 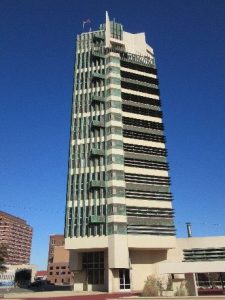 While we were driving and walking around downtown, we noticed that they had ceramic buffalo (bison) painted and placed around town.  We had seen this before. Punxsutawney, PA has ceramic groundhogs around town, and Pensacola, FL sports ceramic pelicans.  We always find it amazing when a town goes all out to show community support.  Here are some of the buffalo we saw around town. 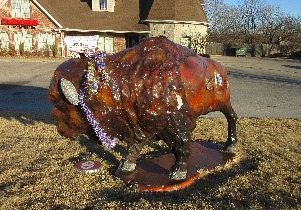 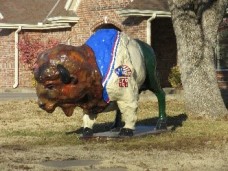 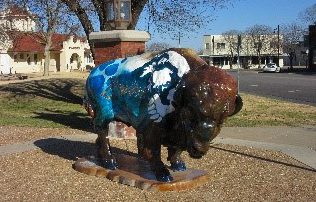 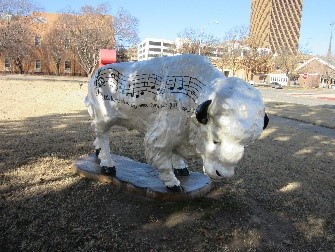 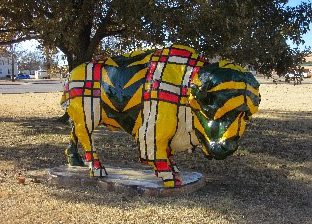 And of course Chewie putting on his buffalo face. 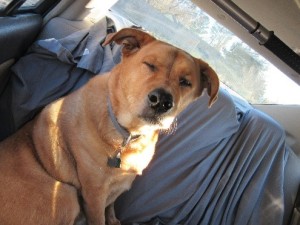 After looking for buffalo and visiting around town, we decided to have lunch.  One of our friends on Facebook told us to try a place called Braum’s.  It is a regional eatery in the Oklahoma, Missouri, Arkansas and North Texas area.  They make their burgers with fresh local beef and fresh ingredients.  What we didn’t know when we went in was that this was also a convenience store with loads of nutritious eats.  It was a great lunch. 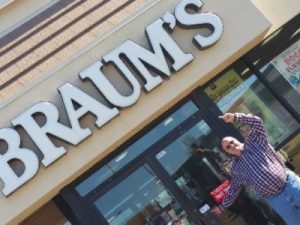 After we ate we decided to go bowling.  Now Angela and I used to bowl in college.  Okay, that’s not exactly true; it is better said that the last time we bowled was back in college.  Okay, we bowled with the grands a couple of months ago, but we did use bumpers.  I noticed there was a banner on the wall that announced that Bartlesville High School won the State Championship in Bowling last year.  There weren’t many people there, but noticing their scores, well, this is a sport that they take seriously.  Neither Angela nor I broke 100, but we had a great time.

After bowling we decided to take a nap.  Us older folks can’t do these midnight things without a nap, so I went to bed having had a wonderful day and woke up throwing up.  For the next 7 hours I could hold nothing down.  It started, and it was okay, we’ll go to dinner later.  Then it was okay, we’ll skip dinner and just go to the drop.  Midnight in New York came and went, I still had a bad tummy.  Finally, we decided that I couldn’t make it.  At midnight we heard the fireworks going off downtown, but I didn’t get to see the Olive Drop.  Now here are the pictures we have, and by this I am going to claim that our trip here was a success. 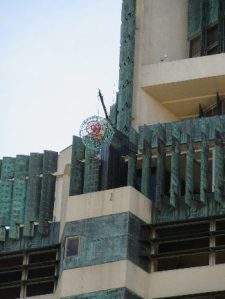 Olive at the top of the building

Martini Glass at the bottom of the building 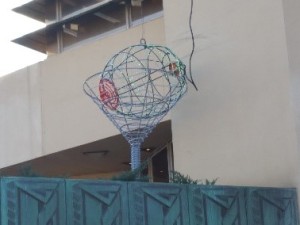 Olive in the glass

I got the before and the after, it would have been nice to have seen the during, but I did hear the fireworks so that has to count.  We had a nice trip home. I’m still recuperating, but it just happened to be a bad illness at a bad time.  Life happens. Happy New Year!