Due to strong winds out of the northeast, eight to ten feet waves are pounding the side of the ship, so many on board look as if they are walking drunk, including myself. As I type this, I rock from side to side. It’s not the worst rocking I’ve experienced on board a huge cruise ship; it’s second worst. Even at that, it’s not too bad. I have been able to eat and drink without dishes sliding off the table.

What is troublesome is that our youngest daughter, Clarissa, is awaiting surgery at Vanderbilt Medical Center in Nashville, Tennessee. At 22 years of age, she has a cerebral blood clot that is not responding fast enough to treatment, so the surgeons have decided the best course of action is removal.

I wasn’t supposed to be on this cruise. It was to be a daddy-daughter graduation cruise. Clarissa completed her B. S. degree at SIU (Southern Illinois University) this past August, but her actual commencement is December 17, 2016. Clarissa was unable to go, so I took her place.

Clarissa was not feeling too well right before Thanksgiving. She had a bad headache at the base of her skull, which is a common location for stress, or tension, headaches. With a lot going on in her life, it made sense. I suggested a few things to try to alleviate the discomfort, but while perhaps offering a bit of easement, the headaches got worse. On Thanksgiving Day, she became nauseated and threw up. Since a one-day tummy bug was going around, the nausea was associated with a bug; she had two issues. When both the headache got worse and the nausea persisted the Saturday after the holiday, I suggested she go to a walk-in clinic. While I did not mention the word, my concern was that she might have meningitis. Evidently, that is what came to mind to care providers at the clinic, and Clarissa was sent to a local hospital ER for testing. When tests were negative, she was sent home with instructions to deal with a severe stress headache.

Headaches only got worse, so Clarissa returned to a doctor. More tests followed with more incorrect diagnoses. It’s a migraine; it’s a brain bleed, etc. Finally, one diagnosis seemed to fit; cerebral sinus thrombosis – a blood clot in the head, most likely resulting from an infection. This seemed to fit because Clarissa has always had one sinus infection after the other. The treatment would be blood thinners to dissolve the blood clot. This made sense, also.

With a diagnosis and treatment plan in place two or three days before the cruise, Jim and I felt confident things were going to be fine. We decided to go ahead on the 7-day cruise; however, I set one of our phones for international calling, so we could check in with her when in ports. The morning of our day in Jamaica, Clarissa texted that she was feeling better and had even been able to get up and take a shower, etc. Encouraged, we enjoyed our visit on the island. That evening, just before leaving port, we received a disheartening text. Though she felt better, the blood clot was getting larger, not smaller. Clarissa was being transferred to Vanderbilt for more extensive treatment. 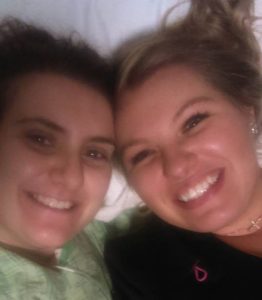 Though the pain is seen in her eyes, Ris smiles when her friend Jessica visits her.

It was mid-day the next day, our Georgetown, Grand Cayman stop, that we purchased Internet usage on the ship as we could not get anyone to respond via text. It was through this that we learned that Clarissa was not only at Vanderbilt Medical Center, but she was in ICU! Jim began calling other family, but it was really through Clarissa’s Facebook posts that we learned the story: surgery seemed imminent.

Immediately, Jim and I began learning what must be done to get him from Cozumel, Mexico, our stop the next day, to Nashville, Tennessee. Venus in customer service on the Carnival Dream was beyond amazing in helping us. Once we knew the process, we found the fastest flight to Nashville that would depart in the time range we had been given and booked the flight. We did all that we could do to prepare on Thursday, and then we enjoyed all there was to do on the ship that evening and the next morning. I even let him beat me in putt putt golf. 🙂 Staying busy helped the time pass and kept us from worrying continuously.

Friday morning, packed and papers in hand, Jim went to the assigned location to meet with Mexican Immigration and Customs. Once past these interviews, he was directed to transportation to the airport in Cozumel. His flights were on time, and he arrived in Nashville as expected. One of his cousins picked Jim up at the airport and took him to the hospital.

Clarissa was to have surgery at 8:00 a.m. this morning (Saturday); it was then moved to 10:00 a.m. The last update is it has been moved to Noon Central Time.  Waiting is hard, especially when that waiting extends the pain of one of our children.  Jim waits in her room, and I wait on board the ship. Tomorrow morning, we return to New Orleans where I will get off ASAP, return to the Holiday Inn Superdome where our car is parked, and begin my journey to Nashville to join him.

This much of the story told, the ship is still rocking. I don’t know yet if Clarissa is actually in surgery. It is 12:41 p.m., and she should be there. Jim says it will be about 3 hours after surgery begins before they will know how it went. I hope and pray for the best.

Now, I will return to the hall ways of the ship, staggering as the swells push against the Carnival Dream. I’ll do the things there are to do: eat lunch, play trivia, watch shows, listen to music, etc. Every few moments I’ll think of Clarissa, think of Jim. I’ll check the time often until it is late enough that I might have a message.  Then I’ll go to a computer and log in to check for word from Jim on Facebook, with hope that all is well.

The update for which I waited: The surgery went well, but did not begin until 1:30 p.m. Even though just a few hours out of surgery, the pain level is down; I can see it in her eyes. Maybe tomorrow we’ll know what is next in her recovery.

For tonight, I’ll be able to rest easier as the ship rocks me to sleep knowing that Clarissa is out of danger and on the road to recovery. We are thankful!

3 thoughts on “Cruise, Clot, and Clarissa”