November 24, 2016 (by Jimmy) – The weekend of Veterans Day (Nov 11-13), Angela and I went to Southern Illinois (all of my kids, 4 grands, and mother live in Massac County – right across the Ohio River from Paducah, KY). We had planned to see each of the kids -Jimmy Jr., John, Clarissa, and my mom –  over the two days we were there. We talked to each prior to the weekend, and it seemed like all might work out. 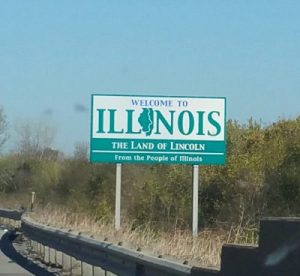 On the way to Illinois, we talked to John and his wife Kelly about meeting up, having lunch, and then taking the grands (Dylan and Aiden) bowling. We met them at their house, visited for a while, and then headed over to Fat Edd’s in Metropolis for lunch. The food was good and the conversation was great. We then took Dylan and Aiden to the bowling alley. This was the same bowling alley I used to go to when I was in high school. Doing so gave John and Kelly a couple of hours of free time, which they spent grocery shopping (have I told you my kids are older than I am? I would have gone to a movie). The grands and I horsed around and had a great time (Angela checked us into a hotel in Paducah and got the dog settled). We had bowled a couple of games when Angela got back, and we talked her into bowling one more game with us. During the third game John and Kelly got back. We visited some more, and then it was time for them to go home before the frozen food thawed. It was a great visit. 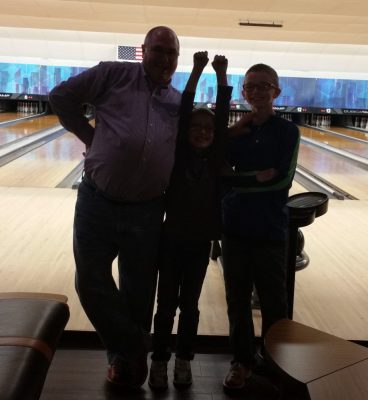 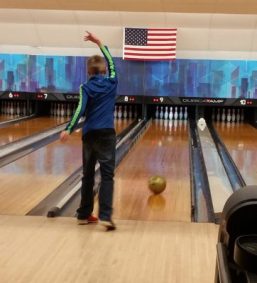 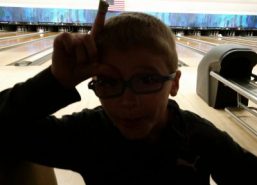 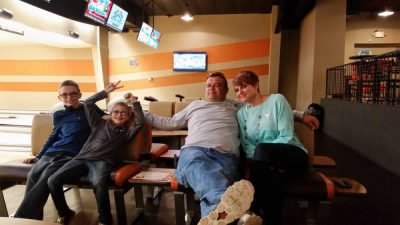 After bowling, we called Clarissa to set up our visit with her. We decided to have supper with her and her boyfriend Josh at the Texas Road House in Paducah. We had supper and a great visit. Clarissa finished her Bachelor’s Degree at Southern Illinois University in August and will go through the graduation ceremony on Dec 17th. After supper, we went to Josh and Clarissa’s place to play cards. Josh’s parents live next door and came by to say hello, but they didn’t stay long. We played cards and had a great time. Afterwards, Angela and I went back to the hotel for the night.

The next day we got up, had breakfast, and headed over to my mother’s. My dad passed about 9 years ago, and mom has remarried. Tommy is a jokester and keeps my mom smiling. We had a great visit, but Tommy was having some medical problems and was not feeling well. Mom took me for a walk and showed me all the things she was doing (or having done) to the property. My sister Sheri came over from Paducah to visit for a while; we talked about my nephews Austin and Ryder and how she was getting along. Visiting with mom is always a joy because you never know what she is up to at any time. Again it was a great visit. 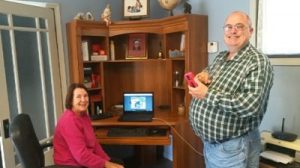 Showing Mom how to get a picture from her phone to her computer. 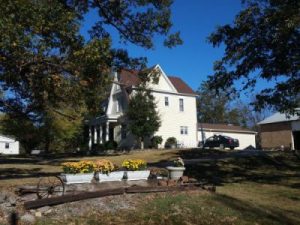 Mom’s house (where I grew up) Joppa, IL

While at mom’s, Angela was texting Jessica (Jimmy. Jr’s wife), to set up a visit with them. We got a good time set up and went to see them at their place. Jessica recently started a new job as an insurance salesperson for Country Life and has done so well that she took second place in most sales in Illinois. We had a great visit. Jim is an electrician and went to North Carolina after the last hurricane to help with getting everyone’s power back on. The grands, Lily and Noah, are growing like weeds. Noah (who is going to be 5 on Dec 12) showed me all the toy catalogs and the things he liked and wanted for Christmas. Lily? Now here’s the story of the weekend.

We brought Chewie with us, and while we were visiting, he was out in the car. Angela needed to go check on him and asked Lily if she wanted to go. She did, and a little while later Angela came back and said you have to see this. Jim and I went outside (Jessica had taken Noah for a nap), and there was Lily in the back seat of the car playing with Chewie. She was getting him to do tricks; he was smiling and having a good time. Angela had given Lily the treat jar. and she had given Chewie a couple of treats for doing tricks. Angela told her to give him one more and that should be enough. She and I then started talking with Jim and some time passed. While we talked, Angela had her back to the car. At this point it was time to leave, and Angela went to help get Lily out of the car (she did have such a good time playing with Chewie). Angela reached in and set the treat jar on top of the car. It was completely empty! Lily leaned over to Chewie on her way out of the car and said, “There now, you won’t be hungry on your way home.” (How sweet.) The treat jar was about three quarters of the way full when we got there. Chewie, sitting in the back seat, looked at me like, “Hey, it wasn’t my fault. She gives me a treat, I’m going to take it. You sure you don’t want to take this one home with us?” Needless to say, Chewie had Milk Bone for supper that night. 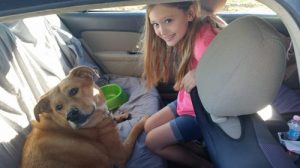 Lily and Chewie party in the back seat

It was an amazing trip. We got to visit individually with all the kids, grands and mom. I could not have asked for a better weekend.