Jim and I woke as planned this past Sunday. It was really dark at 4:00 a.m. He was on the road to Nashville to catch his 7:30 a.m. flight to Alaska not long after that. I attempted going back to sleep, but it just wasn’t happening. How would I spend this first week back in Tennessee, Jim’s third week working in Juneau?

Family first – that was the theme of this week. Monday, after taking care of Chewie and a few other things at the camper, I dressed and headed for Columbia. With Matt off that day, plans had been made to have lunch with Matt and Casey, but first, I needed to give the car some TLC. I stopped along the route to Columbia and filled the Fusion with gas, and then I took it through a car wash with unlimited vacuuming. I spent about 30 minutes trying to get gravel, dirt, and dog hair vacuumed out of the car. Next, I enjoyed a lovely lunch and visit with Matt and Casey, and then Casey went to the grocery store with me. Home again, the groceries were unloaded and put away, and then Chewie needed a walk.

Washing my dirty clothes, and pretty much anything else in the camper that could go in the wash, seemed like a good starting point for Tuesday. After taking care of Chewie and doing a few computer type things, I dressed and loaded clothes, detergent, dryer sheets, and hangers into the car. I had to refresh my memory on where it was we’d gone to the laundromat while in this campground before; I knew it was in Lewisburg. On the way there, I saw a bank and took the opportunity to hit the ATM. I would need more quarters, and to get those, I’d need more cash.

Success! I’d found the laundromat, and no one else was there. At least not yet. Clothes, etc. unloaded, I began filling washers with the pre-sorted clothes. After popping $20 into the change machine and getting more quarters than I could hold in my hands, I fed them like crazy into the washing machines. I’d end up washing six (6) loads. All items washed, dried, and folded or on hangers, once again, the car was loaded. Back to the camper I went. The final unloading of the car done, I had to sit and chill for a bit before putting them away. That was enough, so I enjoyed the Olympics on TV.

It was suppose to rain Wednesday – a lot – so nothing was planned. It didn’t really rain, but it was hot. I spent pretty much the entire day working on things I needed to do on the computer and watching the Olympics.

Thursday, I’d made plans to go see Dad and Nancy, and then we’d all go see Rachel and baby Hershel, and Nathaniel if we hit during his lunch time. Chewie would stay in the fenced-in yard at Dad’s. Well, it did rain. It was the rain that was expected on Wednesday, but we didn’t get too wet in our travels. It was a lot of fun to catch up with Dad and Nancy while traveling to and from the kids’ place, and of course, who doesn’t enjoy baby time. Rain and trains did their best to slow me down, so it was getting kind of late when Chewie and I arrived home, but it had been a good family day.

It rained and rained Thursday night, and Friday morning it continued thunderstorming. About middle of the morning, I felt a drop. I looked up. It was leaking at the exact same place it did in November of last year. My gut told me that all of our traveling, with the many unexpected hard bumps, combined with the heat of the sun had probably cracked the caulking, but I did not feel qualified to check it out and repair it. No one could do it anyway until the rain stopped, but I began my search for some assistance. Lucky for me, a new camper sales and service store had opened a few months ago in Columbia, and they did have mobile RV service. Weather permitting, someone would be out Saturday morning to do repairs.

The source of the leak

I looked at the sky with trepidation. The clouds were dark and heavy, but there had been no rain since the afternoon before. The service lady (yes, lady) arrived and within about 30 minutes, she had taken care of the caulking issues on the roof (and yes, my diagnosis was correct as far as she could tell). Katie pointed out a new issue, something that has arisen since the inspection in late spring, so Jim will need to look at the issue, and then we can have a discussion about remedies when he is home.

Nathaniel, Rachel, and Hershel had planned to come up this way from Alabama to see my Mom on Saturday, and I was going over there to meet them (with Chewie). As soon as Katie left, Chewie and I headed to Mom’s. Nathaniel and Rachel were picking up KFC for all of us to have for lunch. It was a really nice visit and the first time both Mom (G’maw) and Chewie had met little Hershel. Chewie kissed Hershel’s feet, hands, and face; he loved him.  With another storm brewing, we decided to head on home after a couple of hours, and we just did get home before the bottom fell out . . . again. No more leaks, though.

My mom with the kids and grand

Today, Sunday, was the big family day. Amanda and her family had driven from Virginia during Brett’s final R & R time (before they leave for Japan) to come back to Tennessee to have Abby baptized. As many of the families as could descended upon First United Methodist Church in Winchester, Tennessee, today. After the service, the family had lunch in the fellowship hall. It was a great day, and below you will find several pictures from the event. A couple of notes: Steve, the minister, is the biological grandfather (my ex), and in the congregation, you see next to Brett his parents, Frank and Joyce. Beside Joyce are Steve’s parents. All of the living great-grandparents were present. 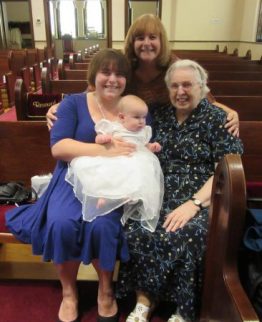 It was a good week, all but the leak – but that could have been worse. Actually, without the leak, we might have gone a much longer time without knowing we have another issue to address. The only thing that would have made the week better would have been if Jim could have been here. I wonder what this next week will bring.