WOW! The days before, during, and after Christmas this year have left us with a Christmas season we are not soon to forget. Actually, almost the entire month of December is one for the record books in terms of temperatures and severe storms. Below is a calendar with the highs and lows for the days in December 2015. While we might have expected a normal December, a normal Christmas season, it has been anything but that. 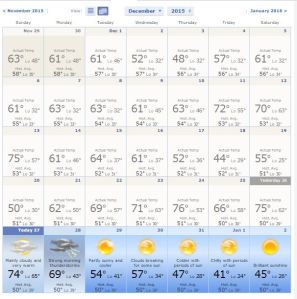 Christmas this year was on a Friday, so Jim and I began the week leading to Christmas on Saturday, December 19th. He made the trip to the Joppa, Illinois area that morning because he had a date with the oldest grandchild Dylan to have lunch and see the new Star Wars movie. After the movie, Jim took Dylan home, where Jim’s son John and his wife Kelly hosted a family Christmas dinner that included Jim’s other children, spouses, grands, and his mom and step-dad. After lots of food and fun family time, Jim made his way back to Savannah where I had stayed with Chewie. While he was away, Nathaniel and Rachel came here to visit, and the three of us shared an early “Christmas” lunch at one of the local restaurants. All of that was pretty normal, and he and I both enjoyed our day.

As you can see from the calendar above, the first half of December was very warm with most days 11 to 25 degrees above average. Though the weekend before Christmas felt a little more “normal,” the normality did not last long. Temperatures quickly rose again, and with it came wind and rain. Despite the warmth, we could not run our air conditioners as the covers were securely put in place when we prepared our RV for winter weather in the middle of November. We did run our A/C in the vehicles. Luckily, I had the foresight to only cover the parts of the windows that we could not open with our “storm windows” (plastic weatherization kit) in place, so we could at least have a breeze.

With high temps and forecasts for severe storms to come our way on December 23rd, my senses were on high alert; I knew something wicked was coming our way, and I shared my concerns with all who would listen. The wonderful owners and staff at Green Acres Resort RV Park took my concerns to heart, and made a point to inform all currently in the park that should the weather become severe, or anyone felt uncomfortable at all, to feel free to come to the Frisbie’s house. When the house became available a bit over a year before, the park owners had purchased the it, in great part because of the huge basement. It would give campers a shelter from storms. December 23, 2015 would prove its first need for such use.

Watching the skies, listening to weather reports, and staying turned to our NOAA radio, my concerns grew as tornado warnings began to be put in place for counties to the northwest and southwest of us. In particular, I heard about a tornado near Clarksdale, MS moving northeast; as it turned out, that same tornado traveled well over 100 miles (130, I think) and came too close to us for comfort. As Jim and I were preparing to leave our camper to go to the Frisbie’s basement, the last thing I heard on our TV before turning it off was that this storm system, with its deadly tornado, had crossed into Tennessee and was approaching Selmer, only a short distance from us (especially as “the crow flies.”) If you click HERE, you will see the map of the path of that tornado. It finally weakened enough to “only” be deemed a severe storm just as, or slightly after, it reached Selmer. Look right on that map, and you will see Savannah, Tennessee. Click HERE, and you can read about that storm and see pictures of the destruction it left in its path.

Once in our “safe spot,” where campers were welcomed along with our animals and given food and drink, we visited while also listening to the weather reports and receiving calls from outside our underground haven giving us updates. Evidently, a bit later in our shelter stay, there were two different tornadoes that were first seen (I must assume in the air due to lack of damage on the ground near us) about 5 miles away near Pickwick Dam. These two tornadoes went on to cause their own damage and destruction in the counties east and north of us; reports on these storms are included in the story linked above.

The Frisbie’s basement where people and animals alike waited out the storm.

We tracked the weather from our shelter. The dark red globs held deadly tornadoes.

We were happy to have had shelter there and to return to our homes untouched by tornadoes.

Thankful to Diane and Larry Frisbie for providing a great place to shelter with friends we have made here, the three of us returned to our RV where we still had series of thunderstorms pass off and on during the night. Christmas Eve was a clear, sunny, and unseasonably warm day. Jim and I headed to Giles County where we picked up my mother to take her to Pulaski to shop and have an early Christmas lunch together in a restaurant. The visit with her was good, but unfortunately, as we traveled, we saw folks working to clear tornado damage from the previous night in the neighboring county.

Once at our home that night, the three of us had a little “Christmas” time, complete with hot chocolate despite the warm weather. Chewie loved his gifts: a new bed blanket and a bag of big chew bones.

Chewie held this bone for 3 hours, working on it a bit at a time.

Christmas Day brought more rain. Starting during the wee hours of the morning, one storm system after the other once again came through. While there were no tornadoes near us this time, the already saturated soil and filled creeks and rivers began to flood. We had plans to have lunch with my Dad and step-mom at their home in Decatur, Alabama. Along our route we saw damage from the tornadoes and flooding that was getting worse by the minute. By the time we arrived at Dad’s, he was telling us roads over which we had just passed were being closed. An alternate northernly route had to be taken for us to get home that evening.

Car flooded – apparently trying to travel across a flooded road – emergency vehicles there to help.

The road we’re traveling beginning to flood; we understand it was closed soon after we passed.

Safely back home on Christmas night, I had a bunch of mixed emotions. I was thankful that we had heard from most all of our family, and all were well and safe. I was glad to be home and that it was whole and dry. Yet, my heart was, and still is heavy, for so many people whose homes are gone or severely damages and whose vehicles are flooded or destroyed by storms. Most importantly, I hurt for those injured and for the loved ones of those who lost their lives in this wicked, unusual, winter weather.

Remember to be thankful for what you have and those you love; we never know what is going to happen. We may think it will be a normal day, a normal holiday, a normal family time. We can plan and prepare, but ultimately, all we really have is the now, so make the most of it.