Yesterday afternoon, from the Mississippi River to the Smoky Mountains, storms swept north to south across Tennessee like Sherman’s army surged through the South towards the sea a little over 150 years ago. While many other states faced similar or worse from these summer storms, the rain, wind, hail, lightning, and thunder were fierce as the storms passed. I wish I had had presence of mind to take a photo of the radar shown on my car screen yesterday afternoon, so I could show you how the line of storms, displayed in bright yellows and reds, made an almost perfect line longways across the Volunteer State.

With only a 30% chance of rain in the forecast, I thought nothing of leaving the awning, with lights attached, out while I took the dog to Florence, Alabama, to the see the vet and for grooming. I also had tires rotated on the car at a Goodyear dealership, picked up meds from Publix, and had dinner with Nathaniel and Rachel (son and daughter-in-law). The “kids” and I had just entered the restaurant when the dark sky opened its fury on northwestern Alabama. During my drive home, I found leaves and limbs, small and large, scattered everywhere, and many places were without power.

With the storms just having left the area upon return to our campground, the sky broke free of clouds, and I saw the gorgeous pinks and reds of the impending sunset. A rainbow greeted me as I turned off the highway into the park itself, and there was a refreshed feeling in the air. However, the anger of one of the passing storms cells left its mark at our site. No, our awning, with its lights, stayed securely anchored by ropes to the ground – most likely because the awning was on the south side and the storm rolled in from the north, but our lovely shade tree is about half of what it was earlier this summer. Our bedroom, which was shaded in the afternoon, is no longer. 😦 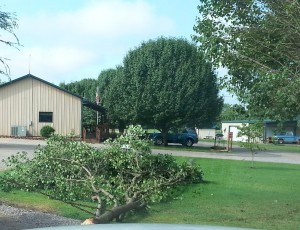 This is one of two sections that came off of the tree on the right.

The staff at Green Acres stay on their toes, so I barely got back from an early morning appointment in time to make a picture of the split portion of the tree as Larry, park owner with his wife, was dragging it away.

We were lucky. I understand there were two tornadoes to touch down in Tennessee, but as rough as it was, we’ve not had it nearly as bad as places like Kentucky and Arkansas, so my thoughts are with all impacted by these and other storms this year.