My skills are not limited to teaching. After graduating with my B. S., I spent 15 years as a stay-at-home mom, so once the kids were older, I needed to do quite a bit to be licensed and certified. Initially, I was not ready for what that would require, so I worked in a variety of jobs before finally returning to school to obtain my M. A. in Education and jump through all of the hoops for licensure and certification.

I find it interesting that the majority of the jobs I had during those years required skills I had developed on my own and for which I had not attended any classes or had any formal training. The requirements for one job technically required a degree in accounting. I haven’t had even one class in accounting, but I’d learned the skills needed, and I worked for a good while in charge of Accounts Payable with responsibility for not one but five separate businesses operated out of the same office. As a result of this position, I learned Quickbooks up one side and down the other, and it was not long before I was working side jobs installing, setting up, and training people in the use of Quickbooks for their small businesses. I think my “accountant/finance guy” husband was pleasantly surprised when we were first dating that I could discuss debits and credits.

Other skills that I developed on my own were a variety of computer skills, including setting up networks and making all of the computers and other devices needed on the network communicate together. I did computer and network upgrades for two companies for which I worked. Although I’ve not been an employee of the company for which I worked this weekend since 2002, I’ve gone back once before to help with an upgrade.

The owner of this company contacted me earlier in the summer and asked if I would come do this for her once again, and she and I compared calendars until we found a weekend that worked as she did not want to have the business shut down during the week. Last Friday night, I drove the four hours to a town near her office and spent the night in a local hotel, so I’d be ready to start work early this next morning. For two full days I worked on her computers, but the job required more than setting up, backing up, moving data, etc. When I arrived, I found that her Outlook had messed up last November, and someone else had set her up on a web-based email program, so she could limp along. One of her hopes was that I could find a way to piece all of her emails back together on the new computer in Outlook 2013 . It did not take long to find that the .pst file required to back up her older Outlook files had somehow been deleted from the computer she’d been using. I had a challenge.

Her business is 90% dependent on email these days, and the work she does can require that she be able to look back at emails received years ago, not just last month or last week. I was pleased that by the end of the second day not only was her new computer set up and connected to the network, all files from the old computer backed up, all recent updates installed to programs, all additional software loaded to the new computer, all backed up files restored to the individual programs, and all data files transferred to her new computer, but she also had all of her emails from the last 4 years restored to her new Outlook. 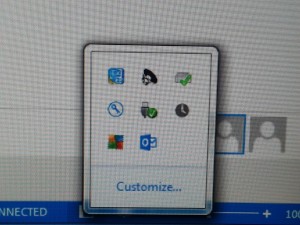 Since training time was limited, I made screen shots and left instructions.

I was, for the weekend, an IT consultant. I was hired to travel to the client site and do a specific job, all of which was related to Information Technology. I did the job well, if I do say so myself, despite the fact that I haven’t had any computer classes. I was paid a very good fee along with travel expenses. This is what a consultant does; this is what I was and am as needed. Heck, I’m Jimmy Johnson’s at home pro bono IT person all of the time. 🙂

This picture is not related to the job I did, but her office is located very close to Cordell Hull Dam in Smith County, Tennessee, so I made a picture on my way to her office Sunday morning.  The views on my drive to her current office, which is not the one in which I worked, are breathtaking. Unfortunately, I had no place to pull over to make photos of these views as the narrow roads had no shoulders, but I thought I’d share this one at least.

One thought on “I’m a Consultant, Too”