The few days prior to and after the long Independence Day weekend were busy and exciting. Our son Nathaniel and daughter-in-law Rachel graciously agreed to come live in the RV during the holiday weekend; they live a little over an hour from where we are located now. Thursday, I did my best to get the camper in shape for “the kids” to come stay, and they arrived around lunch time on Friday. We enjoyed having lunch, supper, and playing cards with them in between meals. Since it was pouring rain outside, the pool was not an option. After supper (dinner for you city folks), Jim and I drove as far as Dickson, Tennessee, where we spent the night. Our flight out of Nashville was early on the 4th.

We arrived in Norfolk, but had to wait a bit for our rental car to be ready to release to us. Still, we made it to our daughter’s home in plenty of time for the grilled burgers and corn and the homemade peach/blackberry cobbler she and Brett, our son-in-law, had cooked. It was amazing! Of course, there was Sammy play time, and very quickly, Jim (aka Papa Dude – or as Sammy says, “Papa Pooh”) were bosom buddies. When it was time for his parents to put him down for the night, Jim and I headed over to the hotel in which we were going to stay, and we returned later to play cards with Brett and Amanda. 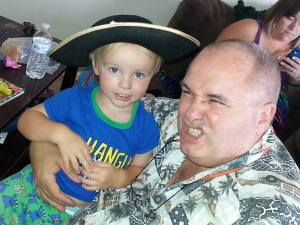 When you play with Papa Dude, you have to make pirate faces

Saturday, after breakfast at the hotel, we joined Amanda, Brett, and Sammy and ventured to the Norfolk Botanical Gardens. It was a beautifully amazing place, and had it not been for the heat and humidity, we probably could’ve enjoyed it all day. As it was, after eating a picnic lunch Amanda had packed and taking a trolley ride through the grounds, we loaded up to head back to their house.

One of the many gorgeous areas at Norfolk Botanical Gardens

At another spot, Jim and Sammy get framed at the Norfolk Botanical Gardens

And sometimes you have to rest as I am here 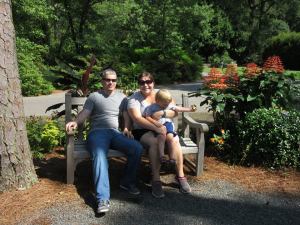 Brett, Amanda, and Sammy taking a respite from heat and walking 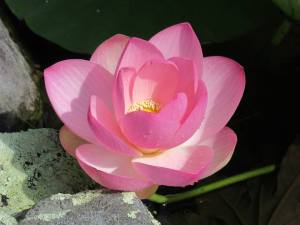 Unfortunately, traffic was rough, and it took us about an hour longer than it should have to get home, which messed up plans for a movie date for Brett and Amanda. Luckily for us grandparents, the two of them decided to still go out and have alone grown up time for a couple of hours while Jim and I kept Sammy. It was a great deal of fun. Once his parents got home, they all needed to go to bed, so Jim and I returned to the hotel to do the same.

Monday morning, our last day visiting, I cooked breakfast for all of us, and then Jim and I got a tour of Brett’s work location prior to him having to go in to work. After lunch, Jim and I visited with Amanda and played with Sammy until time to head to the airport. While the trip to Norfolk had been long since we routed through Orlando, going home was even longer despite the fact it should have been shorter since we routed through Baltimore. Storms along the east coast caused delays and, as we learned after the fact, soaked luggage while being transferred. With delays on both legs added to the almost 3-hour drive from Nashville to Savannah, Tennessee, we did not get back home until almost 2 in the morning, and Jim had to be up at 6 a.m. to get ready and go to work.

Despite all the headaches of going and coming, it was well worth the effort to spend time with the family this 4th of July, especially since it had been over a year and a half since we’d been there. The bonus of going to see Amanda’s crew was that we also got to spend time with Nathaniel and Rachel before leaving, and they did a great job of caring for Chewie and the RV. It is so wonderful to be able to enjoy our children and grandchildren though we are all spread out across the eastern half of the country.