Yesterday, Jim expected to only need to be on the job site a short while; he had a meeting that was supposed to last two hours or less. He asked that I go with him to Corinth, so we could spend the rest of the day doing the touristy thing around Corinth. (Jim posts about the touristy stuff here.) Dressed and on the road early, we had time to grab breakfast in the hospital cafeteria before his meeting. I left to go hang out at McDonald’s, sipping on a drink and enjoying free WiFi. (Just so you know, the free WiFi at McDonald’s does not work well in Corinth, MS.) About 15 minutes after the start time of his meeting, Jim called.  There had been some issues, so the meeting was rescheduled for noon.  I went back and got him, and he and I spent some time at the Corinth Interpretive Center, which is an extension of the Shiloh National Battlefield Historical Site. He and I returned to the hospital in time to grab some lunch before his meeting, and this time I waited for him in the room in which the consultants usually work. When he was finished at the hospital, he and I spent another hour or so looking at other historical sites in Corinth, and then we decided it was time to head home.

While the day had not gone as originally planned, it was at this point that the day’s adventure really took an unusual direction: Jim decided to drive home using a method I have deemed “route roulette.” I’m sure most of you know Russian Roulette – a potentially dangerous game where a single bullet is inserted into the cylinder of a revolver. The cylinder is spun. and the gun is fired. The hope is that the bullet is not in position to fire because that could be lethal. While Jim’s routing by roulette is not quite as dangerous, it is certainly risky.

You see, when driving our Ford Fusion, the map on the GPS is like a video game; Jim can’t help but follow the visible roads to see where they go. Perhaps the better comparison is that the web of lines running across the screen whisper to him to follow similar to a siren’s call.  Either way, from time to time, he can’t help but give in and follow the paths not yet taken.

On this particular day, I must give him credit for at least recognizing the need to go in a north and eastern direction to give us a fair chance of getting home before dark.  Since it was a nice, sunny day and since we seemed to have plenty of time, I happily went along with the shenanigans with one stipulation: NO GRAVEL ROADS.

One of the winding country roads

It actually was quite a bit of fun. We came across gorgeous views, saw four deer cross the road from a field to a wooded area, drove past beautiful farms filled with cows, horses, donkeys, goats, etc. At one point, we turned onto a road named Guys to Wahalla Road. We did not know which direction was Guys and which was Wahalla, but we figured we’d know soon enough as we continued in an eastern direction, and we were correct. We found Guys, TN.

One of the pretty farms we passed 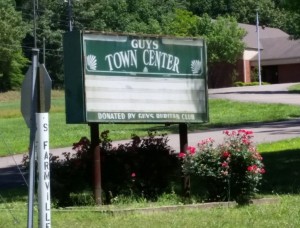 After he and I were back on a main highway, the one on which our RV park is located, we stopped at what has become one of local favorite eateries for a bit of dessert. The Outpost makes all of its own desserts, including homemade ice cream. Jim’s choice of the day was strawberry cake with strawberry ice cream  What else? Strawberries are in season in Tennessee. It was a fun day of exploring, even if we did route by roulette.

One thought on “Day’s Adventure Ended by Route Roulette”