February 5, 2015 (by Jimmy) – I’ve been away from the RV for the last few days.  I had to take a work trip to Steamboat Springs, Colorado. 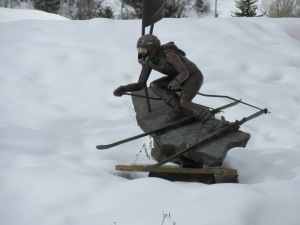 As I flew in, the Colorado mountains were just too beautiful.

Picture of the mountains from the airplane

When I landed the sun was shining, and even though the ground was snow covered, the roads were clear and the drive into Steamboat was 25 miles of beautiful landscape.  I arrived at the hotel on Super Bowl Sunday and went to a sports bar called “Tap House” for supper and to watch the game.  The place was packed, and there was no seating anywhere, but after watching for a few minutes I saw a four*seat table in which only two guys were sitting and asked if they would mind if I joined them.  Thanks to Doug from Detroit and Greg from Chicago for giving up a seat.  The game was good, the commercials were great, and the world’s most perfect woman was the halftime show; what more could you ask of a Super Bowl? (Well, the Sea Hawks could have won and really made it great).  Anyway, I got back to the hotel. Note, the car was clean and had no snow on it.  I woke up the next morning to this… 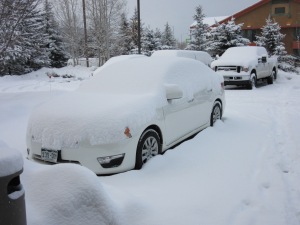 It was a good Monday morning snow for my Birthday making it slow going driving into work.  But I did and we kicked off the project, and later that night I had supper with the recruiter lady (Betsy) who set me up with the client.  It was a great day meeting all the folks and getting prepared to start the project.  Lots of people gave me Birthday wishes on Facebook, through texts and by phone, and even though I was away from Angela, it was a wonderful Birthday.  The next day I woke up to what?  Yep, snow again – only about two inches this time though.  I finished the preliminaries with the client but had my flight scheduled for the next day, so I did some work then took a drive around Steamboat Springs to see some of the sights.  Here are some of the things I saw.

I think this is Sundown Mountain – One guy bought this whole mountain and it is being preserved not to be developed.

A better view of Warner Mountain 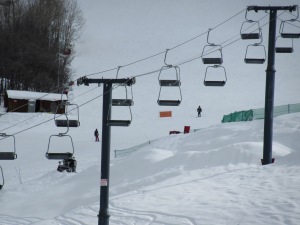 Ski Lift, first time I’ve ever seen one up close, shoot just let me ride that for a while I don’t need skis. 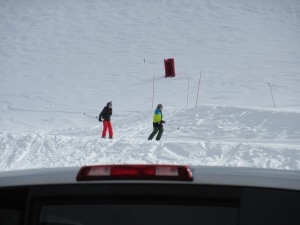 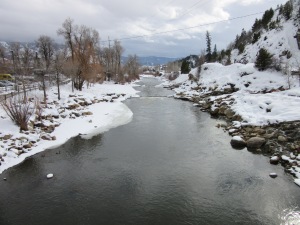 A spring next to the Yampa River, there were many springs around this area, all sulfur springs and smelly but still nice to look at.

Black Spring. I was told that some people drink from this one, I just asked “Why”?

This one is called Sulfur Spring. I wish there was a scratch and sniff for blogs – Now there’s an ap someone should develop. 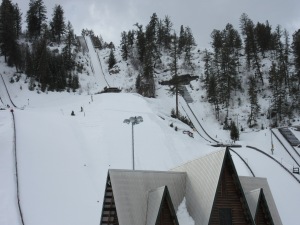 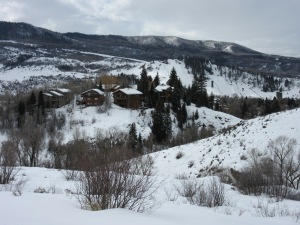 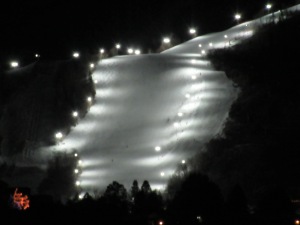 They only started lighting up the slopes about two year ago but the first time I saw it, it took my breath away. 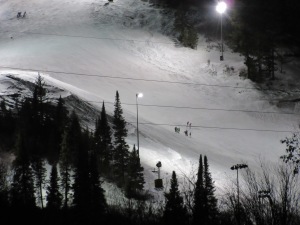 Now I couldn’t leave Colorado without going by one place.  I always believed the when in Rome adage.  So I had to stop.  I had to go in, and I had to share a picture with you. Now, I did not buy, partake, or in anyway do anything other than take a few pictures and leave, but here is a Pot House where they sell Marijuana.

The prices are marked but I can’t read them very well and I didn’t ask, but I’ve heard it is very expensive.

Now, you all know how I like funny signs, signs in weird places, signs that just make you think “What am I reading”.  Well, Colorado did not disappoint in that area either.  I found two that are of note.  The first one here I saw as I was at the counter getting my rental car.  I mean I didn’t know this was an option. 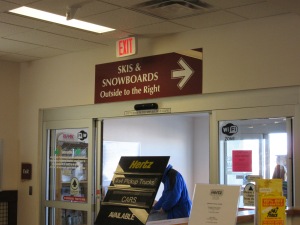 Now if a snow mobile was available I may have taken them up on that but when I rent a car I expect it to have a motor.

This one I personally just found way too funny.

Drive 20 miles then hike another three to get into town.

I woke up on fly -home day, and the news said we were supposed to get 12-24 inches of new snow.  I looked out the window and saw 3-4 had already fallen, and it was snowing like crazy.  I thought to myself, this is a great day to be catching a flight, but I had my game plan.  That plan was wait until 10:00 to allow the snow plows to clean the road.  Then head toward the airport, but if the snow is too much come back and set up another night at the hotel.  By 10:00, the snow had stopped to a trickle; the temp had risen a little, and the plows had gone through allowing a relatively easy drive into the airport.  The big part of the snow was to come later in the afternoon, but I would be in the air by then, and I guess that’s what happened. Anyway, my trip to Colorado was very nice, I met some great people, had some fun, ate some good food, but now I have to focus on what the client needs and what I have to do to provide that.  So, yes, I’m now home from Colorado; now the work really begins. Until later… Later…