Yesterday, with beautiful blue skies and temperatures topping out in the low 70s, Jim, Chewie, and I headed to the beaches of Alabama and Florida. As we drove south, Jake Owen’s song “Beachin‘” played in my head, and it stayed there most of the day. 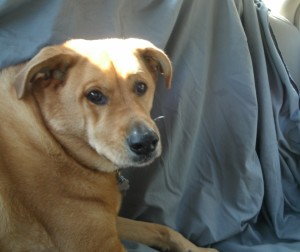 Chewie in the back seat and ready for a fun day

First, we re-visited Gulf Shores, spending most of our time there experiencing Gulf State Park. The three of us explored the camping area pretty thoroughly, and if you want to read Jim’s review of it and see pictures, click HERE.

This photo says it also.

After the campground self-guided tour, the three of us headed for neighboring Orange Beach. We had hoped to find a pet-friendly beach area; that was not to be found on the Gulf side, but we did find a dog park with access to bay beach area. 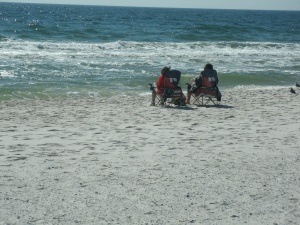 Gulf side at Orange Beach

Chewie getting some off-leash exercise at a nice dog park

After some beach and dog park time, Jim and I were hungry. A couple we met at the park has a home here and in Franklin, Tennessee. When they saw our Tennessee tags, we began chatting. They recommended a place to eat named Cosmos. It worked out perfectly for us; it was close by and it had a nice, shady parking area we could see from the patio dining area.  Chewie rested in a cool place under our watchful eyes while we enjoyed some good food.

My Jerk Chicken with Pasta and Veggies

We headed to Perdido Beach after lunch, slipping just inside of Florida. Here we found a roadside stand with Honey-Bell Oranges, which we had heard about from my dad and step-mom but had never seen. We bought 3 to try. Having set our GPS for Perdido Beach, we were surprised to find that it took us to a section of beach about 30 or 40 yards wide, yet there were a couple of sunbathers there. Chewie enjoyed checking out the stumps visible at low tide. 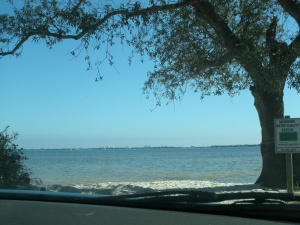 Chewie checking out the stumps

Our “Beachin” day had been a great one. After checking out a nearby KOA, about which Jim will write soon and I’ll link it here, the three of us headed back toward home. Chewie had an evening “spa day” (bath) appointment at 5:00, so we did not have time to venture to Pensacola as planned. That will have to be another adventure for another beautiful day.