Life is much more the same than it is different when one lives full-time in an RV instead of a conventional house, apartment, or condo, especially if one tends to park a month or more in the same location. Today was just a normal day, and it went something like this.

I awoke around 6:30 without an alarm set; there is no need for one. The hubby slept a bit later since he is a night owl (doing his best work after 10 p.m.), and he had nowhere to be and no calls to take early this morning. I took the dog out for a very short walk; the air was cooler than expected after our warm day time temps. Once back inside, I turned on the TV to morning news and opened my computer to check email and Facebook (Facebook is how we keep up with our family 80% of the time) and the daily finance check.

When Jim greeted the new day, I put on a pot of coffee and washed the few dishes put into the sink after I did dinner dishes last night. We talked briefly over a cup of coffee as Jim did the same as I with regard to checking in on the computer. The beginning stabs of hunger (no, we are not in ANY danger of starving) began, so I got Jim to light the oven. Bacon cooked in a pan on the stove top while biscuits baked in the oven.  Once the bacon was crisp and set where it would stay warm, I cooked home fries. Finally, when all else was done, I quickly scrabbled the eggs and pulled out the molasses.  Breakfast was served.

After breakfast, Jim took Chewie for a real walk, and then he and I both worked on our blog. Around 9 a.m., I made the bed and got my shower and dressed for the day; Jim followed after me. We discussed the things we need to do before I head out-of-town for 3 days and 2 nights; I’ll visit my parents and take my mother to her every-six-month eye specialist appointment. It was decided that we’d go ahead and get my car serviced, so we headed for the closest Ford dealership; usually oil changes and the like do not require appointments.

The Ford dealership in Daphne, AL, was disappointing. It was hard to find because of lack of signage due to remodeling, and people to serve you were in short supply. We were told that their service department was backed up because the flu had run through the staff. While sitting in their parking lot, we called a dealership in Mobile, and we were able to get an appointment for an oil change, tire rotation, and routine safety check for 1:30 today. That gave us time to have lunch before driving into Mobile.

I had wanted to check out Cheryl’s Café in Spanish Fort. The café has a 5-star rating, but it is only open 11 a.m. – 2:30 p.m. Monday through Saturday.  The place did not stand out in the little strip mall in which it is located except for the number of cars parked in front of it. While busy, we were able to find a table when we arrived.  This is a classic home cooking meat and three café.  The food was good; the piece of strawberry cake Jim and I shared was amazing, and the prices are fairly reasonable. 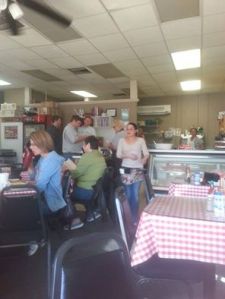 Lunch finished, we drove the AutoNation Ford in Mobile.  Though early for our appointment, we were checked in quickly. My 2010 Ford Fusion Hybrid has over 97,000 miles on it, and the front brakes are original. I expect at every regular service to be told I need new brakes. To be honest, I forced our dealership in the Nashville area to put new rear brakes on about a year ago, but they kept telling me that I didn’t really need them. Jim and I had discussed our tires, the second set, which we felt would need replacing soon even though they are nowhere near the estimated mileage for the tires, and they have been maintained well.  Sure enough, the service man, Larry, came back and said that we needed to think about new tires, but Larry said that “there is nothing wrong with those breaks.”

Car maintenance done, we took the scenic route back to the campground. At the park office, we stopped to get each of us an ice cream sandwich, and then we parked at our site. Jim took the dog out while I brought our things into the camper from the car. Jim checked his emails looking for the final details confirming his next contract, which he hopes to finalized soon. I called my dad to see if he could check with the folks from whom he buys his tires in Decatur.  Based on his purchase of tires recently, it sounds like we may be able to save $75 – $100 on a set of tires if I get them in Decatur while visiting with him this week.

Currently, the sun is about to set, and the soft light of approaching dusk fills the RV, and a gently breeze comes through our open windows. We are watching a documentary titled One Dollar a Day, while I blog and Jim catches up on Facebook.  Dinner is simple tonight; all I need to do is cook some rice and heat the beef and gravy left over from last nights pot roast to go over the rice.  We also have field peas to warm and salad. I hope Jim will be doing dishes tonight.

He and I will relax and enjoy the evening together and have dinner (supper for us country folks) when we get hungry. I’ll probably head to bed by 10 p.m., and my night owl may make it to be bed by 2:00 a.m. While stationary in one place and while Jim is in between contracts, this is just a normal day.  It is very much like how our day would have been if we had been in the house we used to own or the apartment in which we lived after selling the house. Our out-of-the-norm lifestyle is very much normal to us.