January 1, 2015 (by Jimmy) – Happy New Year everyone! If you went to a party, stayed up with a loved one, or decided to wake up to the new year, I hope you look as forward to 2015 as Angela and I do.  Our celebration last night entailed going to… 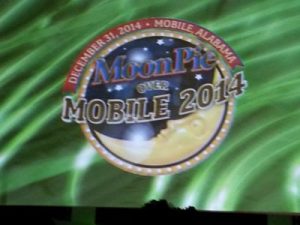 We left the RV around 6:00 pm and went to a restaurant called Callaghan’s Irish Social Club.  This turned out to be a local pub in a residential area.  I expected more from the name and the five star ranking in the Mobile listing of restaurants, but the food was good and the atmosphere was definitely Irish. They had live music that started at 8:00.  We were done eating at 7:45. so the band was tuning up as we were leaving.  We would have stayed and listened to some of the music, but we had never been to downtown Mobile and wanted to make sure we were able to park within a decent walking distance.

So literally a few block down the road, we arrived downtown.  We found a place to park within five blocks of the festivities.  Angela and I parked and walked deeper into the downtown to see what was going on and to search out a good vantage point to see the Moon Pie drop.  Along the way, we saw this gorgeous church.

Jimmy sang and danced with the penguins.

The roads were blocked off and lit up. 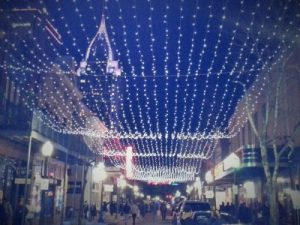 There was a need for the security because there was no ban on open containers or public intoxication.  Anyway, we asked where the Moon Pie drop was going to be and determined where we wanted to be to watch the new year.  However, it was about 8:15 and we weren’t going to stand around for almost four hours in mid forties weather.  So we found an open bench in Bienville Square Park and listened to some music and watched the people.

While we were sitting on the bench a guy came by with a guy holding a camera.  He was from Channel 15 and wanted to do an interview (I guess we looked sober enough).  He asked our names, where we were from (we said Nashville, which is about as close to the truth as could be told without raising a lot of questions); he asked what our New Years’ resolutions were (Angela said to have more fun, I said to travel).  He asked how we were going to make that happen (we told him we bought an RV and were here in Mobile because of it).  It was a good talk, and we wished each other a happy New Year, and he and the camera guy left. I’m not sure if we were on the news or not; I’ve looked for it on the channel 15 website, but have yet to see anything.  After he left, this guy that looked like he was straight out of Grapes of Wrath sat down beside us with a fifth of something.  He called over a few of his friends and this became our cue to move on.  It was now 8:40, so we decide to go look for a place to sit “inside” and have a cup of hot chocolate.  As we walk back down Dauphin Street, we saw this place that we hadn’t seen before, a small movie theater.  It was open and playing Into the Woods, which we hadn’t yet seen.

The movie had just started as we went in, but we were warm and cozy and enjoyed one last movie before the new year.  We came out at 10:40 and made our way to where we were going to watch the New Year festivities.  The Moon Pie slides down the corner of a building, and we found a place between the Moon Pie and the Main Stage.  So we got to our place and are watching the people and 11:00 comes; the dropping of the ball dropping in New York is shown.  So everyone has to throw up an homage cheer because not to cheer New York could get you arrested (it is the center of the earth).  Another thing that happened at 11:00 is that the headliner comes to the main stage.  I didn’t get to see them in concert in the 70s, so I felt like I was making up for lost time when The Village People came on stage. 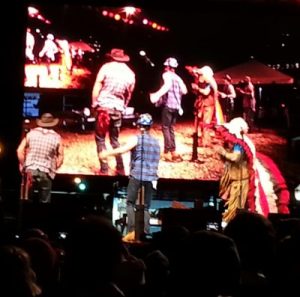 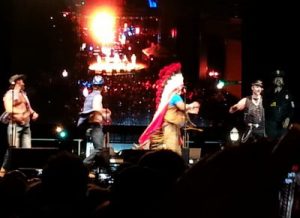 We listened to the concert and had a great time watching them sing and the folks dance.  Before long it was… 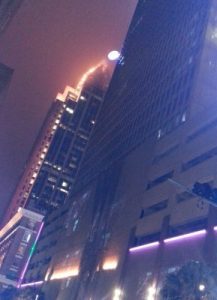 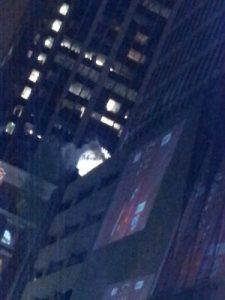 Angela and I then watched a little more of the Village People before heading toward the car.  We were home by 1:00 AM.  Angela and I had another enjoyable New Year’s Celebration.  We have now seen the Conch Shell Drop in Key West, FL, the Pelican Drop in Pensacola, FL, and now the Moon Pie drop in Mobile.  Who knows what we will see drop next year.  I’m taking suggestions… Until later, later…